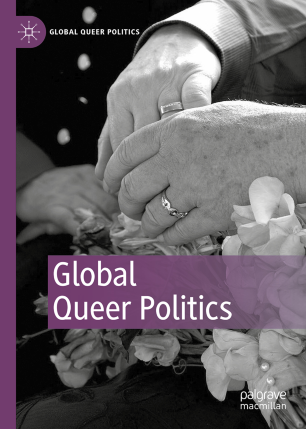 The Global Queer Politics book series is a new outlet for research on political and social processes that contest dominant heteronormative orders in both legal and policy frames and cultural formations. It presents studies encompassing all aspects of queer politics, understood in the expansive terms of much activism as addressing the politics of sexual orientation, gender identity and expression and intersex status, as well as non-heteronormative sexualities and genders more widely – including emerging identities such as asexual, pansexual, or non-binary. As struggles over violence, human rights and inequalities have become more prominent in world politics, this series provides a forum to challenge retrenchments of inequalities, and new forms of contestation, criminalization and persecution, situated in wider geopolitics. Particularly welcome are works attentive to multiple inequalities, such as related to class and caste, race and ethnicity, nationalism, religion, disability and age, imperialism and colonialism. Global, regional, transnational, comparative and national studies are welcome, but that speak to international processes.

Books in the Global Queer Politics series will initially be published  in hardback and ebook formats, and are made available in paperback after two years. Ebook package subscriptions for libraries in less developed countries are in accessible scaled rates relative to the size and location of institutions, enabling free access to library patrons. Additionally these package subscriptions make it possible for library patrons to purchase personal paperback editions of each book when it is released, through the MyCopy scheme.


All academic disciplines and approaches that can contribute to the study of politics, including, but not limited to, international relations, political theory, sociology, socio-legal studies, contemporary history, social policy, development, public policy, cultural studies, media studies and gender and sexuality studies.

Methodologies which may include comparative works and case studies with relevant transnational dimensions, and analyses of global processes. Research from authors who have activist, governmental and international experience, as well as work that can contribute to the global debate over LGBTIQ rights with perspectives from the Global South.'