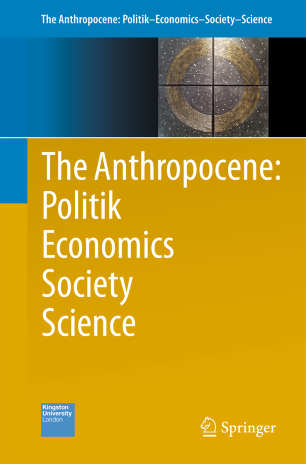 The Anthropocene represents a major shift in Earth history as a result of the direct intervention by humankind into the earth system and nature. The term, coined by Stoermer, was popularized by Nobel Laureate, Paul J. Crutzen, when he declared in Cuernavaca (Mexico) in February 2000: “We are in the Anthropocene”. Crutzen argued that the result of the massive intervention by human economic activities into the earth system, scientifically documented in the rise of GHG (parts per million [ppm] of CO2) in the atmosphere, is that earth history has transitioned from the Holocene, the latest period of earth history following the end of the glacial period 12,000 years ago, to the Anthropo­cene.

When the Anthropocene started is disputed. It may have started at any time between the start of the industrial revolution around 1750 and the end of World War II in 1945, or in 1958 when the scientific measurement of the concentration (ppm) of CO2 in the atmosphere began and since when two-thirds of the increase has occurred. The societal and political impacts of this silent transition from the ‘Holocene’ to the ‘Anthropocene’ may be more severe and long-lasting than the impacts of a) the long-term major technical transitions (the Neolithic or agricultural and industrial revolutions), b) major changes in the political order (Vienna in 1815, Versailles in 1919, Yalta and San Francisco in 1945, the fall of the Berlin Wall in 1989), c) medium-term transitions of governments and major office holders, and d) short-term structure-creating events (e.g. the Russian revolution of 1917).

This peer-reviewed scientific book series addresses this very long-term and severe transition process, where the cause of the change and its potential violent societal consequences are no longer the ‘other’ nation, ethnic, religious or political group, but ‘we’: “we are the threat” and only we as part of humankind can offer a remedy by containing the causes and addressing, facing and coping with the consequences.

The key actors for bringing about such a change are: 1) Politik in its three distinct meanings of ‘politics’ (process), ‘policy’ (field, area) and ‘polity’ (legal and institutional framework); 2) Economics (as the field, actor and process), 3) Society (as the innovative groups and processes), and 4) Science as the source of technical innovation and societal and philosophical reflection.

All books in this series range from 55,000 to 250,000 words, and are published as printed books in softcover and as eBooks, and are also available as individual chapters. All members of academic institutions globally that subscribe to the relevant book package of SpringerLink have free access to these eBooks and may obtain MyCopy at a highly discounted price.

More details on the website of the Series Editor: .