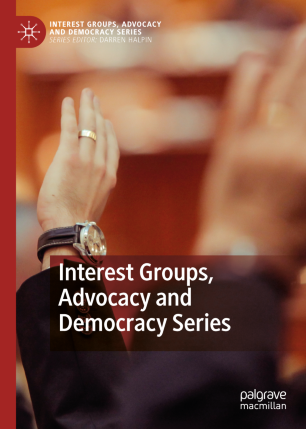 The study of interest groups and their role in political life has undergone somewhat of a renaissance in recent years. Long standing scholarly themes such as interest groups influence mobilization, formation, and 'bias', are being addressed using new and novel data sets and methods. There are also new and exciting themes, such as digital activism, the role of ICTs in enabling collective action and the growth of global advocacy networks, are being added. Contemporary debates about the role of commercial lobbyists and professionalized interest representation are also highly salient. Together, they draw an ever larger and broader constituency to the study of interest groups and advocacy. This series seeks to capture both new generation studies addressing long standing themes in new ways and innovate scholarship posing new and challenging questions that emerge in a rapidly changing world. The series encourages contributions from political science (but also abutting disciplines such as public policy and governance, economics, law, history, international relations and sociology) that speak to these themes. It welcomes work undertaken at the level of sub-national, national and supra-national political systems, and particularly encourages comparative or longitudinal studies. The series is open to diverse methodologies and theoretical approaches. The book series will sit alongside and complement the Interest Groups & Advocacy journal.