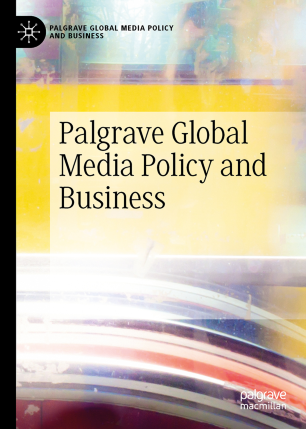 The Palgrave Global Media Policy and Business Series has published to date (2017) 15 volumes since its launch in 2012.  Concentrating on the social, cultural, political, political-economic, institutional, and technological changes arising from the globalisation of media and communications industries, the series considers the impact of these changes on matters of business practice, regulation and policy, and social outcomes. The policy side encompasses the challenge of conceiving policy-making as a reiterative process that recurrently addresses such key challenges as inclusiveness, participation, industrial-labour relations, universal access and freedom in an increasingly globalized and transnationalized world. The business side encompasses a political economy approach that looks at the power of transnational corporations in specific contexts - and the controversies associated with these global conglomerates. The business side considers as well the emergence of small and medium media enterprises.

Focusing on issues of media convergence, industry concentration, and new communications practices, the series analyses the tensions between systems based on national decision-making and publicly-oriented participatory structures and a more global perspective demarcated by commercialization, privatization and monopolization.


Based on a multi-disciplinary approach, the series tackles three key questions:
• To what extent do new media developments require changes in regulatory philosophy and objectives?


• To what extent do new technologies and changing media consumption require changes in business practices and models?


• And to what extent do privatisation, globalisation, and commercialisation alter the creative freedom, cultural and political diversity, and public accountability of media enterprises?