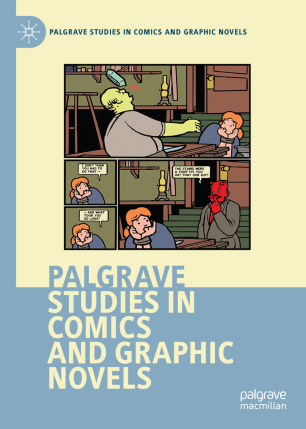 This series concerns Comics Studies—with a capital “c” and a capital “s.” It feels good to write it that way. From emerging as a fringe interest within Literature and Media/Cultural Studies departments, to becoming a minor field, to maturing into the fastest growing field in the Humanities, to becoming a nascent discipline, the journey has been a hard but spectacular one. Those capital letters have been earned.

Palgrave Studies in Comics and Graphic Novels covers all aspects of the comic strip, comic book, and graphic novel, explored through clear and informative texts offering expansive coverage and theoretical sophistication. It is international in scope and provides a space in which scholars from all backgrounds can present new thinking about politics, history, aesthetics, production, distribution, and reception as well as the digital realm. Books appear in one of two forms: traditional monographs of 60,000 to 90,000 words and shorter works (Palgrave Pivots) of 20,000 to 50,000 words. All are rigorously peer-reviewed. Palgrave Pivots include new takes on theory, concise histories, and—not least—considered provocations. After all, Comics Studies may have come a long way, but it can't progress without a little prodding.

Series Editor Roger Sabin is Professor of Popular Culture at the University of the Arts London, UK. His books include Adult Comics: An Introduction and Comics, Comix and Graphic Novels, and he is part of the team that put together the Marie Duval Archive. He serves on the boards of key academic journals in the field, reviews graphic novels for international media, and consults on comics-related projects for the BBC, Channel 4, Tate Gallery, The British Museum and The British Library. The 'Sabin Award' is given annually at the International Graphic Novels and Comics Conference.