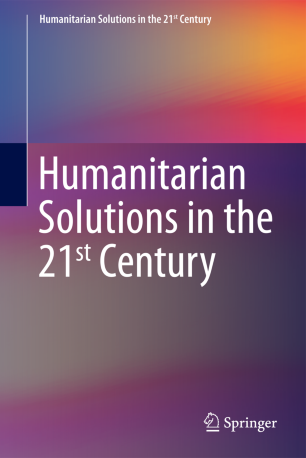 Humanitarian Solutions in the 21st Century

Drawing on the expertise of practitioners from around the globe, this series is dedicated to the hard work of civil society at large and the NGO community in particular. It will help civil society be more effective and illustrate best practices from its perspective, generally through cooperation with international organizations and governments, while remaining independent. Failed nation states and conflicts threaten global economic security in the 21st century. Arab Spring has brought both democracy and chaos. Ethnic groups increasingly want independence or autonomy, e.g. the Kurds of Iraq and many Bedu of the Sinai Peninsula. There are also over 43.7 million refugees and internally displaced persons around the world, and over the last decade about a quarter of a billion people have been affected by natural disasters worldwide, sometimes in areas of conflict where the natural phenomena hinder public order and good governance. Millions suffer every year from human rights and civil rights violations, everything from elder abuse in disasters to prisoners in solitary confinement, women and children in every crisis and the LGBTI community. In addition, while some armed non-state actors will sign Deeds of Commitment to abide by international norms of behaviors, other commit acts of terrorism. Violations on international humanitarian law (IHL) abound. Although governments, the UN and other international organizations play important roles dealing with these issues, increasingly NGOs (private, non-profits managerially independent of governments) conduct both operations to save lives and develop strategies to change the status quo. Peacekeeping is certainly one of the areas where cooperation will be important. In every conflict around the globe where there is a peacekeeping operation, NGOs also play roles directly impacting the civil population and sometimes as advisers to the host government. It’s important for NGOs therefore to understand how peacekeeping has evolved since the first multilateral operation in SAARLAND during the period of the League of Nations to today’s varied programs, not all of which are run directly by the UN, e.g. the MFO (Multinational Forces and Observers). As Series Editor, I encourage NGOs in any manner of disaster or development project to introduce themselves to the UN Resident Representative so that the UN can be a partner. In conflicts where there are peacekeeping operations between true combatants, NGOs should retain neutrality; but introduce themselves as well in order to avoid confusion. Even while neutral in the conflict, both the Peacekeeper and the NGO can collaborate, for example in the evacuation of civilians. Of course, every crisis is different. We often see tension when a host government appoints a military force as the logistical lead, as was frequently the case during the Tsunami crisis when US forces and those of other nations operated in Indonesia, Sri Lanka and Thailand. Similarly, the US air force provided direct logistical aid to NGOs during the Cyclone Nargis, flying in supplies for free, thus significantly reducing the cost of relief for NGOs. If associating with peacekeeping operations or UN agencies endangers an NGO’s security, the NGO needs to act appropriately; but communication is essential in every crisis, both to educate the peacekeepers or UN and other relief agencies as to the role and security fears of the NGO; but also to provide the IO or peacekeepers to share their own perspective. Cooperation is different than partnering.