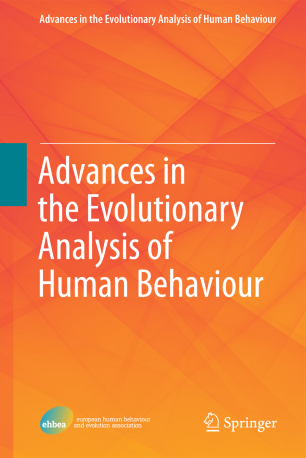 Advances in the Evolutionary Analysis of Human Behaviour

The aim of the book series is to promote EHBEA’s tenets of rigour, integration and pluralism by producing a series of methodologically rigorous books with a pluralistic theme in the human behavioral sciences. These would include both integrative books on a single topic in the human behavioural sciences but including a range of viewpoints from the different sub-fields; and pluralistic books with a broad theme but also drawing in examples from the different sub-fields. Books focusing on methodological issues and developments of relevance to the field, and teaching resources are also envisaged. The application of evolutionary theory to the human behavioural sciences is relatively new, taking off towards the end of the 20th century. This endeavour has been very successful, but there was a tendency at first for the contributing disciplines, such as psychology and anthropology, to proceed in parallel rather than by joining forces to develop a holistic understanding of human behaviour. EHBEA was founded to capitalise on, and promote, new pluralistic and integrative developments in the human evolutionary behavioural sciences, as the field matures. The boundaries between the main sub-fields of human behavioural ecology, evolutionary psychology and cultural evolution are now becoming blurred. Research in this area is becoming increasingly methodologically sophisticated, making use of advances in statistical analysis, computer modeling and phylogenetic methods, and incorporating new techniques such as brain imaging. The field is also becoming increasingly influential and integrated with other disciplines, such as medicine and human biology, and social sciences such as anthropology, sociology, economics and demography.