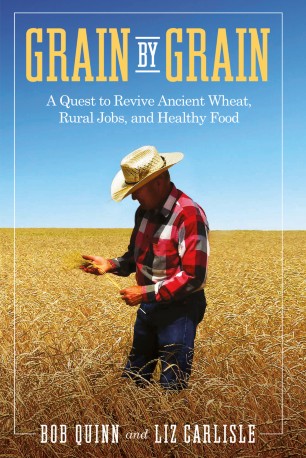 "A compelling agricultural story skillfully told; environmentalists will eat it up."

"In the age of start-ups and tech crazes, it might seem counterintuitive to call something as ancient as grain 'revelatory.' Nevertheless, Bob Quinn's quest to recapture the value of our food system through grain is just that—a revelation. Liz Carlisle and Bob Quinn have unlocked the key to kickstarting change—Grain by Grain is one big kernel of truth."
Dan Barber, chef/co-owner, Blue Hill, and author of "The Third Plate"

"Grain by Grain is a book for our times, one that demonstrates alternatives to help diversify agriculture, develop more resilient systems, and stimulate rural economies in a future with uncertain economic and climatic conditions. It is a must-read resource for those in agriculture who suffer from the pains of trade wars and tariffs, negative environmental spin-offs from chemical technologies, and narrow focus on a few major commodity crops. The book outlinesa thoughtful entrepreneurial process for designing and implementing a diverse and economically viable future for agriculture and rural areas."
Agroecology and Sustainable Food Systems

"Farmer and plant biochemist Bob Quinn's passionate story makes it impossible to go on farming (or eating) as usual. A must-read for anyone who wants to understand why our food system is so unhealthy and how we can fix it."
Daphne Miller, MD, author of "Farmacology: Total Health from the Soil Up"

"Long before anybody heard the term social enterprise, a few untrained businesspeople started small, unconventional companies to solve problems for their neighbors—and succeeded beyond their wildest dreams. This is the story of one such entrepreneurial effort, which demonstrates how a green economy rooted in regenerative organic agriculture and renewable energy can help rebuild struggling communities in rural America."
Yvon Chouinard, founder of Patagonia

"A compelling personal story that takes the wind out of the war on wheat and charts a course for getting rural America off the agrochemical treadmill."
David R. Montgomery, author of "Growing a Revolution: Bringing Our Soil Back to Life"

Bob Quinn is a leading green businessman, with successful ventures in both organic agriculture and renewable energy.  Raised on a 2,400 acre wheat and cattle ranch in Montana, Quinn earned a Ph.D. in plant biochemistry at UC Davis before coming home to farm in 1978. In 1986, he planted his first organic crop, and by 1989, he had converted his entire farm. He served on the first National Organic Standards Board, which spurred the creation of the USDA’s National Organic Program, and has been recognized with the Montana Organic Association Lifetime of Service Award, The Organic Trade Association Organic Leadership Award, and Rodale Institute’s Organic Pioneer Award. As an entrepreneur, Quinn has founded five significant enterprises: a regional mill for organic and heritage grains, an organic snack company, a business that sells culinary oil and recycles it as biofuel, Montana’s first wind farm, and Kamut International. Kamut, the ancient grain Quinn revived from a pint jar of seed found in a neighbor’s basement, is now grown on 100,000 acres of certified organic cropland and manufactured into over 3500 products worldwide. In addition, Bob remains active in research, and has co-authored pioneering studies on the nutritional benefits of ancient grain.

Liz Carlisle is a Lecturer in the School of Earth, Energy, and Environmental Sciences at Stanford University, where she teaches courses on food and agriculture, sustainability transition, and environmental communication. She holds a Ph.D. from UC Berkeley and a B.A. from Harvard University, and she formerly served as Legislative Correspondent for Agriculture and Natural Resources in the Office of U.S. Senator Jon Tester. Recognized for her academic writing with the Elsevier Atlas Award, which honors research with social impact, Liz has also published numerous pieces for general audience readers, in the New York Times, Los Angeles Times, Business Insider, and Stanford Social Innovation Review. A former country singer who once opened shows for Travis Tritt, LeAnn Rimes, and Sugarland, Carlisle brings a populist flair to the 40+ talks she gives each year. Her first book, Lentil Underground, (2015) won the Montana Book Award and the Green Prize for Sustainable Literature.