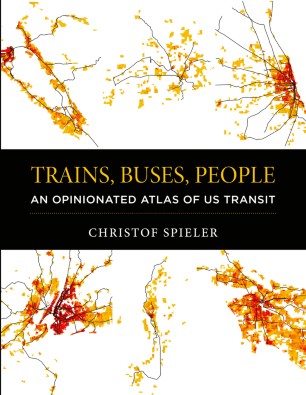 An Opinionated Atlas of US Transit

"Transit planners, elected representatives, and transportation enthusiasts should all find something to love or learn in this honest and expansive status report."

"Spieler knows this subject to a significant depth but has managed something remarkable, perhaps mirrored in his choice of the accessible atlas format: he has made a great deal of comparative information very easy to understand and digest. The approach is tailor-made to help convince nonexperts—be they the general public or perhaps more importantly politicians and others with influence—to mimic the good and avoid the bad...The end result makes the book a compelling and useful compendium of the state of transit in the United States."
Civil Engineering

"Gets right to the point: put [transit] where the people are...The author combines detailed knowledge and a refreshing frankness...Keep this book within easy reach."
Planning

"Spieler's book is perfectly designed to be both readable and browsable—a great gift for an urbanist or transport geek and a great book for the coffee table. You can read around in for a long time, exploring different cities, their strengths and their missed opportunities. Let's hope it produces a smarter conversation about urban transit."
Jarett Walker's Human Transit blog

"Belongs on an urbanist's bookshelf...one of the best transit/planning books I've read in a long time."
Greater Greater Washington

"This edifying publication...serves as an awakening guide to planning both feasible and practical public-transit systems."
San Francisco Book Review"For all of their hardcore infrastructure, urban transit networks are essentially human creations, and understanding what makes them successful is essential for building successful cities. Supported by urban histories and incisively presented data, Christof Spieler sets the rules of engagement for effective transit and offers a roadmap for achieving it."
Janette Sadik-Khan, Principal, Bloomberg Associates; former NYC Transportation Commissioner

"Christof Spieler was the driving force behind Houston's transit transformation, but he's also one of America's great transit travelers, a careful observer of history, technology, geometry, and politics. This book is an atlas of beautiful detail about 47 U.S. cities, but it's also a call to action, demanding clearer and more effective transit planning and advocacy."Jarrett Walker, President and Principal Consultant, Jarrett Walker + Associates, author of "Human Transit"

"This book is comprehensive enough to be a resource for transit professionals, but delivered in readable, straightforward language; an objective look at the state of transit by a passionate advocate."
Annise Parker, former Mayor of Houston

Christof Spieler, PE, LEED AP, is a Vice President and Director of Planning at Huitt-Zollars and a Senior Lecturer at Rice University. He was a member of the board of directors of Houston's Metropolitan Transit Authority of Harris County (METRO) from 2010 to 2018. As the chair of METRO's Strategic Planning committee, he initiated the Transit System Reimagining process, a blank sheet re-design of the entire bus system. Since Mayor Annise Parker appointed him to the board in 2010, METRO has successfully obtained $900 million in federal funding for light rail, increased transparency, put Houston on firm financial footing, and initiated a new BRT project in a major job center. He was reappointed by Mayor Sylvester Turner in 2016. At Huitt-Zollars, he has done land use and transportation plans in a variety of settings, including a mixed-use district plan in Downtown Houston, citywide land use policy in Sugar Land, TX, a multimodal medical center access plan in El Paso, a transit-oriented development master plan in Seattle, a Livable Centers Plan in Rosenberg, a new bike plan for Houston, and transit planning in St. Paul. His recent work includes park planning for the Houston Parks Board and the Buffalo Bayou Partnership and project management of a consortium of researchers addressing flooding in Houston. Christof has written and spoken extensively on transit and urban planning. He teaches courses in Architecture and Civil Engineering at Rice University. As a member of the American Public Transit Association's Sustainability and Urban Design Working Group, he has helped draft national standards on transit and urban design. He is also a contributor to NACTO's Transit Street Design Guide and a board member at TransitCenter in New York. Christof holds a B.S. and M.S. in Civil Engineering from Rice University. He lives in Downtown Houston and relies on transit and walking for most of his daily trips.