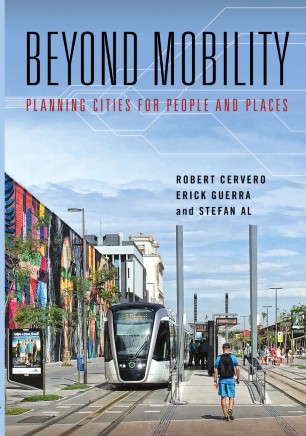 Planning Cities for People and Places

Cities across the globe have been designed with a primary goal of moving people around quickly—and the costs are becoming ever more apparent. The consequences are measured in smoggy air basins, sprawling suburbs, unsafe pedestrian environments, and despite hundreds of billions of dollars in investments, a failure to stem traffic congestion. Every year our current transportation paradigm generates more than 1.25 million fatalities directly through traffic collisions. Worldwide, 3.2 million people died prematurely in 2010 because of air pollution, four times as many as a decade earlier. Instead of planning primarily for mobility, our cities should focus on the safety, health, and access of the people in them.
This volume is about prioritizing the needs and aspirations of people and the creation of great places. This is as important, if not more important, than expediting movement. A stronger focus on accessibility and place creates better communities, environments, and economies. Rethinking how projects are planned and designed in cities and suburbs needs to occur at multiple geographic scales, from micro-designs (such as parklets), corridors (such as road-diets), and city-regions (such as an urban growth boundary). It can involve both software (a shift in policy) and hardware (a physical transformation). Moving beyond mobility must also be socially inclusive, a significant challenge in light of the price increases that typically result from creating higher quality urban spaces.
There are many examples of communities across the globe working to create a seamless fit between transit and surrounding land uses, retrofit car-oriented suburbs, reclaim surplus or dangerous roadways for other activities, and revitalize neglected urban spaces like abandoned railways in urban centers.

The authors draw on experiences and data from a range of cities and countries around the globe in making the case for moving beyond mobility. Throughout the book, they provide an optimistic outlook about the potential to transform places for the better. This book celebrates the growing demand for a shift in global thinking around place and mobility in creating better communities, environments, and economies.

Robert Cervero is Professor Emeritus of City and Regional Planning at the University of California, Berkeley. He is the author of six books in the urban transportation field, including The Transit Metropolis, Transit Villages for the 21st Century, Paratransit in America, America’s Suburban Centers, and Suburban Gridlock, as well as numerous articles and research publications. He was a contributing author to the recent IPCC (International Panel on Climate Change) Fifth Assessment and UN-Habitat's Global Report on Sustainable Mobility and in 2013 was ranked among the top 100 City Innovators Worldwide by UMB's Future Cities. He is an experienced consultant and advisor, and has conducted an evaluation of car-sharing in San Francisco, and case-based research on transportation and sustainable urbanism. He is also active on the international scene, advising and conducting research in Bogota, Colombia and Xi’an, China. He won the 2003 Article of the Year for the Journal of the American Planning Association. Cervero is a Fellow with the Urban Land Institute and the World Bank Institute, and serves on the editorial boards of several international journals.

Erick Guerra is Assistant Professor of City and Regional Planning at the University of Pennsylvania, where he teaches courses in transportation planning and quantitative planning methods. He has published a dozen articles on the relationship between transportation infrastructure, land use, urban development, and travel behavior.

Stefan Al is Associate Professor of Urban Design at the University of Pennsylvania. He has published several books, including Factory Towns of South China: An Illustrated Guidebook and The Strip: Las Vegas and the Architecture of the American Dream. As a practicing architect and urban designer, he has worked on renowned projects such as the Canton Tower in Guangzhou.