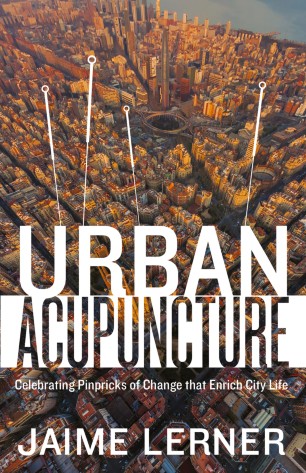 During his three terms as mayor of Curitiba, Brazil in the 1970s and ‘80s, architect and urbanist Jaime Lerner transformed his city into a global model of the sustainable and livable community. Through his pioneering work, Lerner has learned that changes to a community don’t need to be large-scale and expensive to have a transformative impact—in fact, one block, park or a single person can have an outsized effect on life in the surrounding city. In Urban Acupuncture, his first work published in English, Lerner celebrates these “pinpricks” of urbanism—projects, people and initiatives from around the world that ripple through their communities to uplift city life. With meditative and descriptive prose, Lerner brings readers around the world to streets and neighborhoods where urban acupuncture has been practiced best, from the bustling La Boqueria market in Barcelona to the revitalization of the Cheonggyecheon River in Seoul, South Korea. Through this journey, Lerner invites us to re-examine the true building blocks of vibrant communities—the tree-lined avenues, night vendors and songs and traditions that connect us to our cities and to one another.