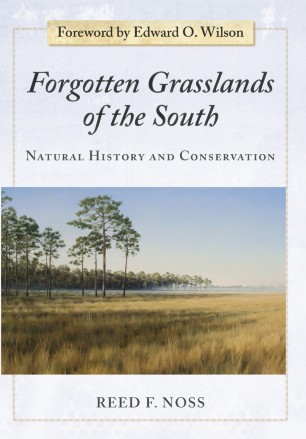 Forgotten Grasslands of the South

Forgotten Grasslands of the South is a literary and scientific case study of some of the biologically richest and most endangered ecosystems in North America. Eminent ecologist Reed Noss tells the story of how southern grasslands arose and persisted over time and addresses questions that are fundamental for conserving these vital yet poorly understood ecosystems.

The final chapter presents a general conservation strategy for southern grasslands, including prioritization, protection, restoration, and management. Also included are examples of ongoing restoration projects, along with a prognosis for the future.

In addition to offering fascinating new information about these little-studied ecosystems, Noss demonstrates how natural history is central to the practice of conservation. Natural history has been on a declining trajectory for decades, as theory and experimentation have dominated the field of ecology. Ecologists are coming to realize that these divergent approaches are in fact complementary, and that pursuing them together can bring greater knowledge and understanding of how the natural world works and how we can best conserve it.

Forgotten Grasslands of the South explores the overarching importance of ecological processes in maintaining healthy ecosystems, and is the first book of its kind to apply natural history, in a modern, comprehensive sense, to the conservation of biodiversity across a broad region. It sets a new standard for scientific literature and is essential reading not only for those who study and work to conserve the grasslands of the South but also for everyone who is fascinated by the natural world.

Professor Noss has nearly 300 publications and is recognized as one of the 500 most highly cited authors in all fields. His research involves the application of science to species-level and ecosystem-level conservation planning, restoration, and management. He is currently writing a book on southern grasslands, studying the effects of suburban and exurban development on bird communities, and conducting research on impacts of, and adaptation to, sea-level rise in Florida.