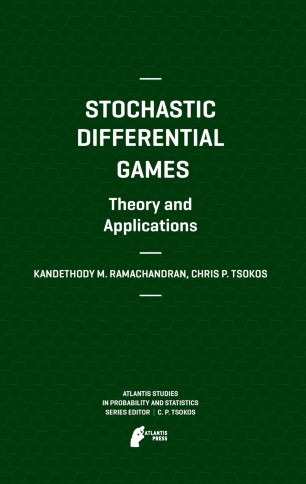 Part of the Atlantis Studies in Probability and Statistics book series (ATLANTISSPS, volume 2)

Conflicts in the form of wars, or competition among countries and industrial institutions are plenty in human history. The introduction of game theory in the middle of the twentieth century shed insights and enabled researchers to analyze this subject with mathematical rigor. From the ground-breaking work of VonNeumann and Morgenston, modern game theory evolved enormously. In the last few decades, Dynamic game theory framework has been deepened and generalized from the pioneering work on differential games by R. Isaacs, L.S. Pontryagin and his school, and on stochastic games by Shapley. This book will expose the reader to some of the fundamental methodology in non-cooperative game theory, and highlight some numerical methods, along with some relevant applications.

Since the early development days, differential game theory has had a significant impact in such diverse disciplines as applied mathematics, economics, systems theory, engineering, operations, research, biology, ecology, environmental sciences, among others. Modern game theory now relies on wide ranging mathematical and computational methods, and relevant applications that are rich and challenging. Game theory has been widely recognized as an important tool in many fields. Importance of game theory to economics is illustrated by the fact that numerous game theorists, such as John Forbes Nash, Jr., Robert J. Aumann and Thomas C. Schelling, have won the Nobel Memorial Prize in Economics Sciences. Simply put, game-theory has the potential to reshape the analysis of human interaction.