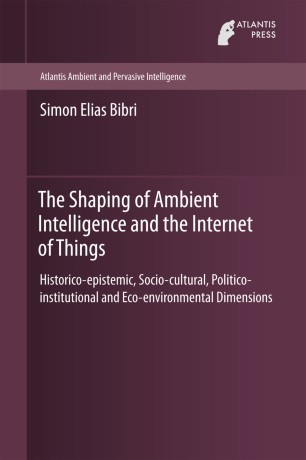 The Shaping of Ambient Intelligence and the Internet of Things

Recent advances in ICT have given rise to new socially disruptive technologies: AmI and the IoT, marking a major technological change which may lead to a drastic transformation of the technological ecosystem in all its complexity, as well as to a major alteration in technology use and thus daily living. Yet no work has systematically explored AmI and the IoT as advances in science and technology (S&T) and sociotechnical visions in light of their nature, underpinning, and practices along with their implications for individual and social wellbeing and for environmental health. AmI and the IoT raise new sets of questions: In what way can we conceptualize such technologies? How can we evaluate their benefits and risks? How should science–based technology and society’s politics relate? Are science-based technology and society converging in new ways?  It is with such questions that this book is concerned. Positioned within the research field of Science and Technology Studies (STS), which encourages analyses whose approaches are drawn from a variety of disciplinary perspectives, this book amalgamates an investigation of AmI and the IoT technologies based on a unique approach to cross–disciplinary integration; their ethical, social, cultural, political, and environmental effects; and a philosophical analysis and evaluation of the implications of such effects.
An interdisciplinary approach is indeed necessary to understand the complex issue of scientific and technological innovations that S&T are not the only driving forces of the modern, high–tech society, as well as to respond holistically, knowledgeably, reflectively, and critically to the most pressing issues and significant challenges of the modern world.
This book is the first systematic study on how AmI and the IoT applications of scientific discovery link up with other developments in the spheres of the European society, including culture, politics, policy, ethics and ecological philosophy. It situates AmI and the IoT developments and innovations as modernist science–based technology enterprises in a volatile and tense relationship with an inherently contingent, heterogeneous, fractured, conflictual, plural, and reflexive postmodern social world.
The issue’s topicality results in a book of interest to a wide readership in science, industry, politics, and policymaking, as well as of recommendation to anyone interested in learning the sociology, philosophy, and history of AmI and the IoT technologies, or to those who would like to better understand some of the ethical, environmental, social, cultural, and political dilemmas to what has
been labeled the technologies of the 21st century.