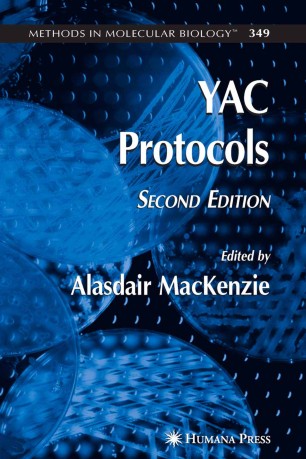 It is now 10 years since the first edition of YAC Protocols was published in 1996. YAC Protocols was first produced to address the huge demand within the research community for a lab-based text that described in detail the wide range of uses for large insert yeast artificial chromosome (YAC) DNA clones. In doing this, the original editor, David Markie, and the many different contri- tors who provided descriptions of the protocols they used and developed, did a magnificent job. Indeed many of the techniques described within the first e- tion require little change and have stood up admirably to the test of time. Since the first edition, the use of YACs has proved invaluable for addressing a wide range of new biological problems ranging from those of basic biochemistry to assisting in the mapping and sequencing of the human genome. The requirement for a second edition of YAC Protocols was prompted by a number of major advances in biology since the publication of the first edition. These advances have included the sequencing of the human genome, and the genomes of a wide variety of other organisms, and the increased use of transgenic animals for understanding the molecular basis of human and animal disease.