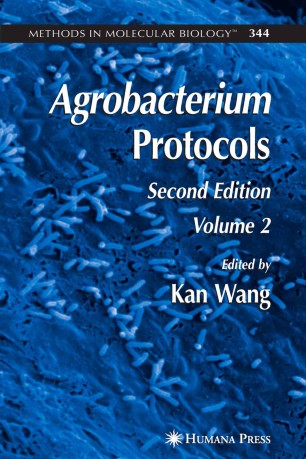 Agrobacterium tumefaciens is a soil bacterium that for more than a century has been known as a pathogen causing the plant crown gall disease. Unlike many other pathogens, Agrobacterium has the ability to deliver DNA to plant cells and permanently alter the plant genome. The discovery of this unique feature 30 years ago has provided plant scientists with a powerful tool to genetically transform plants for both basic research purposes and for agric- tural development. Compared to physical transformation methods such as particle bomba- ment or electroporation, Agrobacterium-mediated DNA delivery has a number of advantages. One of the features is its propensity to generate single or a low copy number of integrated transgenes with defined ends. Integration of a single transgene copy into the plant genome is less likely to trigger “gene silencing” often associated with multiple gene insertions. When the first edition of Agrobacterium Protocols was published in 1995, only a handful of plants could be routinely transformed using Agrobacterium. Ag- bacterium-mediated transformation is now commonly used to introduce DNA into many plant species, including monocotyledon crop species that were previously considered non-hosts for Agrobacterium. Most remarkable are recent devel- ments indicating that Agrobacterium can also be used to deliver DNA to non-plant species including bacteria, fungi, and even mammalian cells.