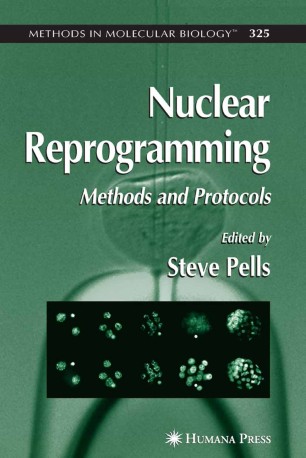 Although nuclear reprogramming-the cellular process underlying cloning and the artificial generation of stem cells from somatic cells-may be considered a "black box" whose interior events are either completely unknown or at least imperfectly characterized, tantalizing clues about its operation are beginning to emerge. In Nuclear Reprogramming: Methods and Protocols, hands-on laboratory scientists describe readily reproducible methods for actually performing nuclear reprogramming by nuclear transfer in several different species, by fusion induced both chemically and electrically, and by the in vivo treatment of cells with cell extracts. Isolation of an adult stem cell type is also described. In addition, several methods of monitoring nuclear reprogramming are presented, including the use of transgenic markers, activation of telomerase as an ES-specific marker, light and electron microscopic observation of structural changes in the nucleus, and the verification of surface marker expression and differentiation potential of stem cells. Biochemical methods are provided for the examination of chromatin protein modifications, nucleosomal footprinting, transcription factor binding, and the study of DNA methylation changes both at the specific locus level and at the level of the whole nucleus. The protocols follow the successful Methods in Molecular Biology™ series format, each offering step-by-step laboratory instructions, an introduction outlining the principles behind the technique, lists of the necessary equipment and reagents, and tips on troubleshooting and avoiding known pitfalls.
Wide-ranging and highly practical, Nuclear Reprogramming: Methods and Protocols significantly expands the repertoire of methods available to perform, study, and understand nuclear programming, not only for cloning, but also for reprogramming somatic cells to stem cells.