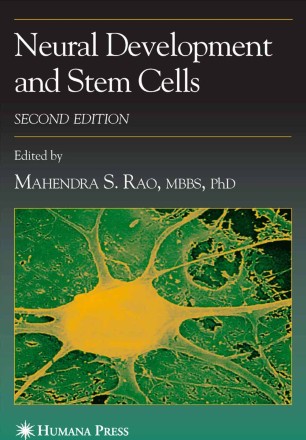 Developing the second edition of Neural Development and Stem Cells was neces- tated by the rapid increase in our knowledge of the development of the nervous system. It has become increasingly clear that stem cells are a heterogeneous population that changes extensively during development. Perhaps the most important advance in our understanding of stem cell behavior has been the realization that regionalization of stem cells occurs early in development and this bias toward differentiation in phe- types of neurons or cells characteristic of a particular part of the brain appears to persist even after prolonged culture. We have therefore included additional chapters on olf- tory epithelial stem cells and retinal stem cells, both of which differ in their properties from ventricular zone and subventricular zone–derived neural stem cells. It is also now clear from an analysis of mutants and transgenics where the death or self-renewal pa- way is altered that cell death regulates stem cell number. As a consequence, this second edition includes a separate chapter on cell death that summarizes the important changes in the death pathway that occur as stem cells mature. The existing chapters in the book have also been extensively revised and updated by experts who have generously c- tributed their time and expertise. The chapters have been organized along the lines of our understanding of how the nervous system develops (Fig. 1, on p. vi).