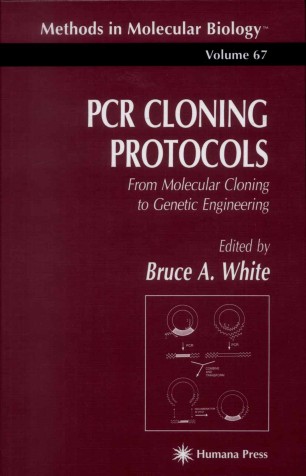 From Molecular Cloning to Genetic Engineering

The advent of PCR, with its power to amplify tiny amounts of DNA, quickly spawned the development of many analytical procedures that are widely used for detection, measurement, and characterization. However, creative investigators soon discovered the power of PCR for synthetic or preparative uses. This volume focuses on such preparative PCR protocols, which can be used in the cloning and modification of DNA. PCR Cloning Protocols: From Molecular Cloning to Genetic Engineer­ ing is divided into seven parts, each containing a collection of chapters address­ ing a general approach or goal. Part I presents basic PCR protocols, emphasizing optimizing conditions for (he amplification of DNA fragments of several kilobases in length. Part 11 offers several procedures for cloning PCR prod­ ucts, depending on whether a specific restriction site can be used in the clon­ ing vector, the PCR product is to be gel purified before cloning, or the fragmeni needs to be inserted in one or both orientations. Part III includes several pro­ tocols involved in the mutagenesis of DNA, either site-directed or not, as well as several approaches to recombinant PCR, either for mutagenesis or building a custom gene, as well as one chapter describing a specific use of in vitro selection. Part IV addresses the frequent need to amplify and clone segments of DNA that are to the right, left, or scattered within a stretch of DNA (either vector, chromosomal, or cDNA) of known sequence.