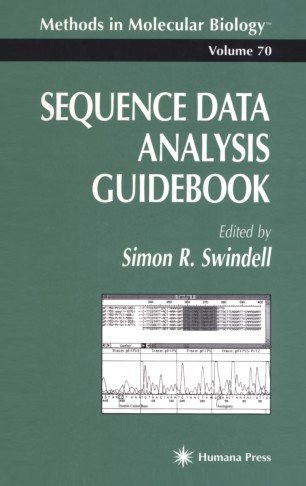 Computers have revolutionized the analysis of sequencing data. It is unlikely that any sequencing projects have been performed in the last few years without the aid of computers. Recently their role has taken a further major step forward. Computers have become smaller and more powerful and the software has become simpler to use as it has grown in sophistication. This book reflects that change since the majority of packages described here are designed to be used on desktop computers. Computer software is now available that can run gels, collect data, and assess its accuracy. It can assemble, align, or compare multiple fragments, perform restriction analyses, identify coding regions and specific motifs, and even design the primers needed to extend the sequencing. Much of this soft­ ware may now be used on relatively inexpensive computers. It is now possible to progress from isolate d DNA to database submission without writing a single base down. To reflect this progression, the chapters in our Sequence Data Analysis Guidebook are arranged, not by software package, but by fimction. The early chapters deal with examining the data produced by modem automated sequenc­ ers, assessing its quality, and removing extraneous data. The following chap­ ters describe the process of aligning multiple sequences in order to assemble overlapping fragments into sequence contigs to compare similar sequences from different sources. Subsequent chapters describe procedures for compar­ ing the newly derived sequence to the massive amounts of information in the sequence databases.