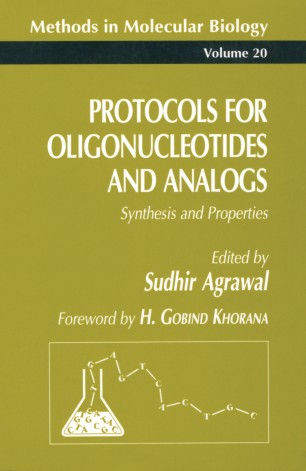 Protocols for Oligonucleotides and Analogs

When first conceived, not only was the aim of Protocols for Oligo­ nucleotides and Analogs to provide wide coverage of the ohgonuc- otide chemistry field for readers who are well versed within the field, but also to give investigators just entering into the field a new perspective. The very first book on this topic was edited and published by Michael Gait in 1984, in whose laboratory I encountered the newer aspects of oligonucleotide chemistry. Since then, oligonucleotide research has developed to such an extent that its uses extend far beyond basic studies, and now find wide application throughout clinical science as well. Until recently, the major application of oligonucleotides has been in the area of DNA-based diagnostic and "antisense oligonucleotid- based therapeutic approaches. However, oligonucleotides are now also being used as therapeutic agents and are thus frequently found in clinical trials in humans. Synthesis of unmodified oligonucleotides using automated synthe­ sizers has become a common practice in numerous laboratories. How­ ever, improvements on the existing techniques and the introduction of ever newer methods for oligonucleotide synthesis is constantly driving ahead in the leading research laboratories. And several new oligonucle­ otide analogs have been synthesized and studied for their individual prop­ erties in recent years. The present volume strives to bring the readers the most up-to-date information on the newest aspects of synthesis of oligo­ nucleotides and their analogs. A separate volume covers synthesis of oligonucleotide conjugates, along with most of the analytical techniques presently used for analysis of oligonucleotides.