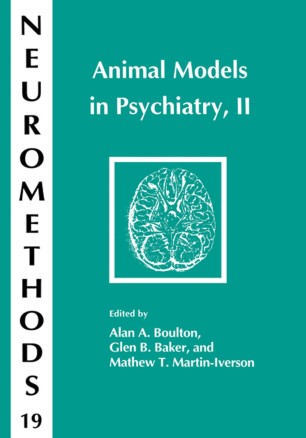 The two Animal Models in Psychiatry volumes are loosely organized by subject. The first volume contains a number of chapters concerned with schizophrenia, psyc- ses, neuroleptic-induced tardive dyskinesias, and other d- orders that may involve dopamine, such as attention deficit disorder and mania. Also included is a chapter describing a behavioral model for activity-induced anorexia. The second volume deals with affective and anxiety disorders, but also includes chapters on subjects not easily classified as either psychotic, affective, or anxiety-related, such as aggression, mental retardation, and memory disorders. Four chapters on animal models of schizophrenia or psychoses are included in Volume 18 because of the importance of these disorders in psychiatry. Likewise, three chapters in the present v- ume deal with affective disorders, with a fourth chapter on circadian rhythms that also contributes to methods for a- mal models in affective disorders. Following the first four chapters are two chapters dealing with models of anxiety and panic, two chapters on aggression, one on mental retardation, and a final chapter covering memory disorders. Many of the behaviorally-based models of affective disorders involve inducing stress in a- mals, usually on a chronic basis. The first chapter by Anisman, Zalcman, Shanks, and Zacharko describes some of the neurochemical effects that are associated with the chronic application of sensors.

...extremely valuable for readers in the fields of psychopharmacology and biological psychiatry. -Quarterly Review of Biology
Buy options