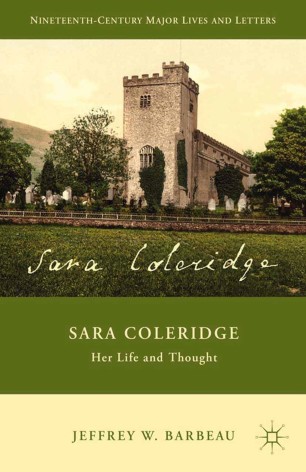 Her Life and Thought

Known as the daughter of Samuel Taylor Coleridge, Sara Coleridge's manuscripts, letters, and other writings reveal an original thinker in dialogue with major literary and cultural figures of nineteenth-century England. Here, her writings on beauty, education, and faith uncover aspects of Romantic and Victorian literature, philosophy, and theology.

“Jeffrey W. Barbeau’s latest publication, Sara Coleridge: Her Life and Thought, is the most recent work in a burgeoning field of criticism on Samuel Taylor Coleridge’s daughter. … Barbeau provides the first sustained examination of Sara as an important nineteenth-century intellectual in her own right. … Barbeau establishes Sara as an under-represented key figure, one who deserves more attention as a scholar and thinker in her own right, and outside of the shadow of her more famous father.” (Joanna E. Taylor, Romantic Textualities, romtext.org.uk, March, 2016)

"[This book] rescues a neglected and misunderstood figure . . . It gives insights into the life as well as the mind, and particularly excels at demonstrating the sheer range of Sara's intellectual input." - Times Literary Supplement

"Sara Coleridge has been consistently underrated in the past, and Jeffrey W. Barbeau's fine study does much to redress the balance." - John Beer, Professor of English Literature, University of Cambridge, UK

"Sara Coleridge has been known as the daughter of her father, the poet-philosopher Samuel Taylor Coleridge, and the defender of his reputation in the next generation. Jeffrey W. Barbeau does not diminish the importance of these roles, but he shows in this book how fully Sara acted as a participant in the theologico-metaphysical debates of her day. Taking issue with the Oxford Movement, she wrote penetratingly on the salient religious issues of the time such as the nature of regeneration. We can now clearly see Sara as an independent and creative intelligence." - David Bebbington, Professor of History, University of Stirling, UK

"Jeffrey W. Barbeau's sparkling critical introduction to Sara Coleridge proclaims her significance as one of the foremost intellectuals of her time. Moving beyond her poetry for children and editorial work, Barbeau presents a philosophically energetic and lively woman whose hitherto neglected writings on theology, education, illness, aesthetics, and the Bible confirm her significance within late Romanticism and nineteenth-century culture. Whether critiquing Tractarianism and Roman Catholicism, or defending her father's biblical hermeneutics, Coleridge's writing is revealed as both captivating and discerning in a study that promises to inaugurate further scholarship on this much overlooked thinker and critic." - Emma Mason, Professor of English and Comparative Literary Studies, University of Warwick, UK