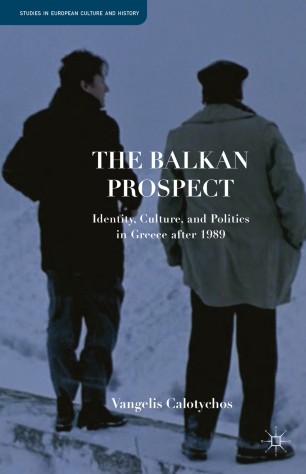 Identity, Culture, and Politics in Greece after 1989

Following the fall of the Soviet Union in 1989, the borders hitherto separating Greek culture and society from its contiguous Balkan polities came down, and Greeks had to reorient themselves toward their immediate neighbors and redefine their place within Europe and the new, more fluid global order. Projecting the political foresight and mustering the modernization policies to succeed in such an undertaking turned out to be no small feat, especially as the regional conflicts that had lain dormant during the Cold War were revived. Synthesizing the cultural, political, and historical into a sophisticated, interdisciplinary analysis, this innovative study untangles the prolonged 'historical moment' in which Greece and Europe were effectively held hostage to events in the Balkans - just at the time when both hoped to serve as the region's welcoming hosts.

Vangelis Calotychos is Associate Professor of Modern Greek Literature and Culture, at the Program in Hellenic Studies, Department of Classics, Columbia University, USA.

"Calotychos's book is more than a significant contribution to the field of Greek and Balkan studies. It is an homage to the cultural legacy left by a pleiad of modern creators, despite or due to their tribulations in the land of 'no fun and games.'" - American Hellenic Institute

"Given the current social situation in Greece and the Balkans, the destructive consequences of globalization and neoliberal ideology, sooner or later Hellenic studies will have to face the growing gap between social reality and the Greek cultural canon, and at that point Calotychos's work and the work of this group will emerge as the dominant one." - Journal of Modern Greek Studies

"The book testifies to the richness of the analytical potential of culture, and offers few but precious glimpses of hope for the development of progressive identities in an ever-changing socio-political landscape." - Journal of Greek Media & Culture

"Calotychos' critical awareness and theoretical soundness will make his book essential reading for those studying the modern Balkans and the discourse of Balkanism." - Byzantine and Modern Greek Studies

"How should we study Greece after the Cold War? This question prompts the author to venture in 'discourse-archeology' and excavate a troubled Greek modernity from under the 'crypto-colonial' dirt of the Hellenic canon. Going beyond the insular national perspective and ushering in a paradigmatic shift post-Todorova, this book will render the old Hellenic and Balkan studies narrative 'unreadable.'' - Dušan Bjeli?, University of Southern Maine, USA, author of Normalizing the Balkans and co-editor of Balkan As Metaphor

"Interrogating the very category of the Balkans against the conventional bounds of national or regional certainty, Calotychos has produced a groundbreaking analysis that has changed the field virtually overnight. With multi-layered juxtaposition of literary, filmic, geographical, cross-cultural, and cross-genre dimensions, he charts not only the historical gravity of a complex cultural region but the terrain of its uncertain future. A tour de force of scholarship and intellectual daring, this book will be of standard reference for years to come." - Stathis Gourgouris, Professor of Comparative Literature and Director, Institute for Comparative Literature and Society, Columbia University, USA

"This book is one of the most imaginative and original attempts during the last five years to make a fresh contribution to modern Greek studies. Though the emphasis of the project is on the period after 1989, discussing primarily cultural imperatives which have imposed themselves anew on Greece and the Balkans since that 'historic moment,' the historical context is ever present throughout the author's narrative." - Theofanis G. Stavrou, Professor of History and Director, Modern Greek Studies, University of Minnesota, USA

"This book delivers a complex, sophisticated, and intriguing narrative on Greece's positionality within and without the Balkans. It does so through a restless search for the cultural forms and texts through which difference is processed or manifested." - Augusta Dimou, GWZO, Centre for the History and Culture of East Central Europe, University of Leipzig, Germany