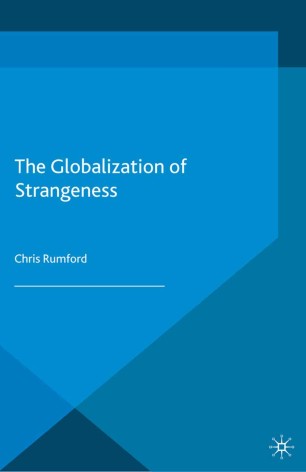 The figure of the stranger is in serious need of revision, as is our understanding of the society against which the stranger is projected. Under conditions of globalization, inside/outside markers have been eroded and conventional indicators of 'we-ness' are no longer reliable. We now live in a generalized state of strangeness, one consequence of globalization: we no longer know where our community ends and another one begins. In such circumstances it is often the case that neighbours are the nearest strangers. Strangeness occurs when global consciousness outstrips global connectivity and this means that we need to rethink some core elements of globalization theory.

Under conditions of strangeness the stranger is a 'here today, gone tomorrow' figure. This book identifies the cosmopolitan stranger as the most significant contemporary figure of the stranger, one adept at negotiating the 'confined spaces' of globalization in order to promote new forms of social solidarity and connect with distant others.

Chris Rumford is Professor of Political Sociology and Global Politics at Royal Holloway, University of London, UK. He is the author of many books including The European Union: A Political Sociology, Rethinking Europe (with Gerard Delanty), The Sage Handbook of European Studies, Cosmopolitanism and Europe, and Cosmopolitan Spaces: Europe, Globalization, Theory.

"In this original and highly readable volume, Rumford moves debate beyond the figure of the stranger as an intrusion from outside toward strangeness as a feature of the human condition in an epoch of globalization." - Robert Holton, Trinity College, Dublin, Republic of Ireland
Buy options