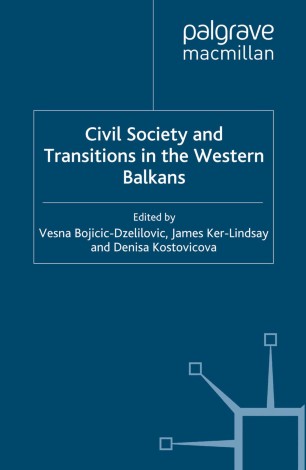 Civil Society and Transitions in the Western Balkans

Societies and the Crisis of Globalization

VESNA BOJICIC-DZELILOVIC is Senior Research Fellow at the Civil Society and Human Security Research Unit at the Department of International Development and the European Institute at the London School of Economics and Political Science, UK.

JAMES KER-LINDSAY is Eurobank EFG Senior Research Fellow on the Politics of South East-Europe at the European Institute, London School of Economics and Political Science, UK.

DENISA KOSTOVICOVA is Senior Lecturer in Global Politics at the Department of Government at the London School of Economics and Political Science, UK.

“The book mainly deals with the postwar or post-conflict social reconstruction/development in different countries and the role of civil society in that development. … The book certainly has many qualities and will attract a wide readership.” (Siniša Zrinščak, Southeastern Europe, Vol. 40 (1), 2016)

'This fascinating collection of essays on civil society and war- to -peace transitions in the Western Balkans is a must read. Anyone who is sensitive to the dilemmas currently facing those actors, from the local to the global, involved in peacebuilding or statebuilding will recognise them too. This volume places civility, society and the pressing question of what emancipation actually means in liberal modernity back at the centre of the debate on peace in the region, the function of the state, and the role of international actors.'

'This thoughtful volume offers an important contribution to scholarship on the role which civil society plays in post-conflict societies. The contributions rightly challenge the frequent presumption that civil society actors necessarily promote civility, human rights, or democratisation. The nuanced studies of experiences from the Western Balkans demonstrate the range of civil society, with its virtues and vices, offering cautionary tales for international policymakers and programmers who seek to promote civil society often without understanding the pitfalls.

'This book offers wonderful insight and systematic reflection on the paradox of civil society in Eastern Europe, which after returning the concept to both the headlines and the academic curricula in 1989 has found far more difficult since to deliver the promised liberal democracy ideal. A must read for activists, donors and everyone interested in the process of building democratic constituencies everywhere.'