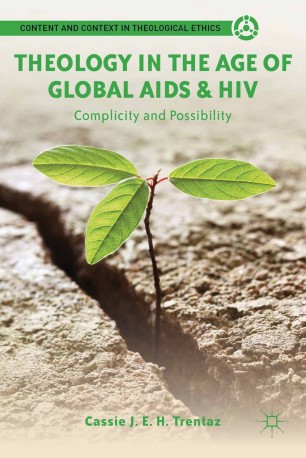 Theology in the Age of Global AIDS & HIV

Trentaz proposes an inclusive, complex framework for understanding the creation and maintenance of risk of contracting HIV & AIDS, takes a hard look at dominant theologies and proposes a new way of approaching a theo-ethical response to the pandemic within a communal ethic of 'risk-sharing,' privileging the voices of the marginalized.

CASSIE TRENTAZ lives in Portland Oregon where she is an Assistant Professor of Theology, Ethics, and Church History at Warner Pacific College, USA. Her teaching and research interests lie in the contextual intersections of theology, ethics, anthropology, and history and her commitments include theological and ethical reflections on the ways racism, classism, sexism, ecological concerns and other structures of power differentials that influence human experience and community. She is also interested in what thoughtful, engaged theo-ethics have to say back to those structures in the complex contexts of our times and our places. She is a teacher, activist, and minister.

"The HIV/AIDS crisis has involved a perfect storm of controversial issues - drugs, sex, and sexuality - that make for a challenging theological discussion. Cassie Trentaz's new book provides a fresh and courageous contribution to this discussion of HIV/AIDS, and the possibility of thinking ethically and doing ethics within the context of this death-dealing crisis. In particular, Trentaz tackles the issue of risk of exposure through attention to 'risk environments' and the role played by theological discourse in the construction of these troubled and troubling environments. The outcome of this discussion is the proposal of a new modality of thinking and acting based on the theo-ethical value of 'risk-sharing' premised on the vitality of new postures such as informed engagement and hospitality. A much-needed addition to the existing literature authored by figures such as Elias Bongmba." - Anthony B. Pinn, Agnes Cullen Arnold Professor of Humanities, professor of Religious Studies, Founding Director, HERE Project, Director of Research, Institute for Humanist Studies, Rice University

'Cassie J. E. H. Trentaz is to be commended for addressing the topic of HIV and AIDS from a fresh theological/ethical viewpoint. Though HIV and AIDS have been called an 'unprecedented human catastrophe' by the United Nations, theologians and ethicists in the United States basically have ignored the topic except for passing references. Trentaz recognizes this failure in her profession, and seeks in this manuscript to analyze the theological and ethical roots of the stigma and discrimination that uniquely permeate the pandemic rather than focusing solely on risky sexual behavior or injecting drug use of individuals, she draws attention to the lack of free choice women repeatedly experience in countries around the world, as well as the impact of poverty, hunger, violence, and illiteracy in enabling the spread of HIV. This book makes an essential contribution to the developing discussion of how traditional theology and ethics have played a significant role in advancing the pandemic, and also provides clues to how a new theology and ethics could become a life-giving force to help end the age of HIV and AIDS.' - Donald E. Messer, executive director, Center for the Church and Global AIDS, President Emeritus and Professor Emeritus of Practical Theology, Iliff School of Theology, Denver, CO