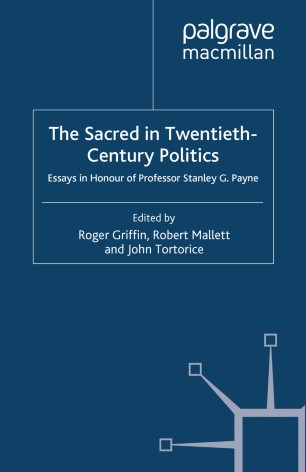 The Sacred in Twentieth-Century Politics

The emerging shape of the post Cold War world provides evidence that rather than diminishing, the profound intersection of political ideology and religious forms of belief is an ever more potent force in world affairs. This volume offers both theoretic underpinnings, and a comparative analysis that elucidates this potent and dangerous phenomenon.

ROBERT MALLETT is Lecturer in Modern European History at Birmingham University, UK. He is author of Mussolini and the Origins of the Second World War, 1933-1940.

ROGER GRIFFIN is Professor in Modern History at Oxford Brookes University, UK. His previous books include The Nature of Fascism and Modernism and Fascism. He has also edited Fascism, a documentary reader of primary sources relating to fascism published by OUP (1995), International Fascism. Theories, Causes, and the New Consensus, a documentary reader of secondary sources published by Arnold in 1998, and the five volumes of secondary sources relating to fascism in Routledge's Critical Concepts in Political Science series (1993).

JOHN TORTORICE is Director of the Mosse Program in Cultural and Intellectual History at the University of Wisconsin-Madison, USA. He is co-author (with Stanley Payne and David Sorkin) of What History Tells: George L, Mosse and the Culture of Western Europe and (with Jack Fry and John Tedeschi) Italiian Life Under Fasciism: Selections from the Fry Collection at the University of Wisconsin-Madiison.