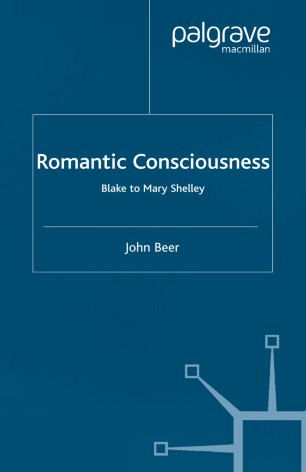 Revolutionary thinking at the end of the Eighteenth century prompted major English writers to probe the riddle of human consciousness and the ways in which it might differ from 'Being' in a divine or universal sense. In the first of two studies, John Beer traces this question in writings by Blake, Coleridge and Wordsworth, and the impact of their ideas on successors such as Keats, De Quincey, Byron and the Shelleys. Relevance to later figures such as the Cambridge Apostles and Tennyson is also discussed.

John Beer is Emeritus Professor of English Literature, University of Cambridge and Fellow of Peterhouse. His work on Romanticism includes Coleridge the Visionary, Coleridge's Poetic Intelligence, Blake's Humanism, Blake's Visionary Universe, Wordsworth and the Human Heart, Wordsworth in Time, Questioning Romanticism (ed.), Romantic Influences and Providence and Love .He has edited Coleridge's Poems for Everyman's Library, his Aids to Reflection for the Collected Works and is General Editor of the series Coleridge's Writings .

'John Beer draws on half a century of reading and thinking in this remarkable commentary on the fortunes of 'Being' in the works of the great Romantics. John Beer has always been distinguished as a scholar by his ability both to value the historical idiosyncrasy of his subjects while relating their writings to the perennial human preoccupations, and his book is full of sympathetic illumination and intellectual delight.' - Seamus Perry, Fellow of Balliol College and Tutor in English, University of Oxford, UK

'This beautifully written book shows how close readings of the works of the canonical Romantics Blake, Coleridge, Wordsworth, Keats, De Quincey, Mary Shelley, P.B. Shelley and Byron can still enlighten readers interested in topical conceptions of consciousness. Framing his study in a critical discussion of the theories of Antonio Damasio, John Beer probes the distinction between Being and consciousness, an elusive yet vital theme explicated here with an admirable lightness of touch. Beer brings the Romantics into conversation, comparing generously-quoted passages of poetry and prose, and the result is an enhanced understanding not only of prototype notions regarding the darker regions of the subconscious mind, but also of the patterns of influence, allusion and dialogue between these writers. An excursion into the introspective concerns of Tennyson and the circle of Cambridge Apostles deftly demonstrates the continuity of the Being-consciousness duality at the outset of the Victorian period. Romantic Consciousness is to my mind as essential as it is pleasurable reading for scholars and advanced students of Romanticism and nineteenth-century literature.' - James Vigus, Visiting Research Fellow, Queen Mary, University of London, UK