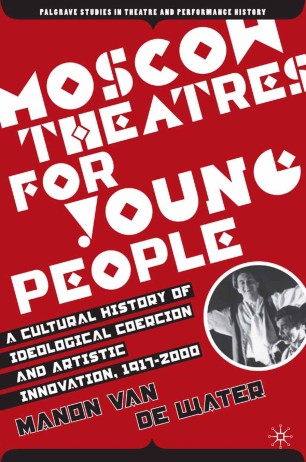 This book shows how the totalitarian ideology of the Soviet period shaped the practices of Soviet theatre for youth. It weaves together politics, pedagogy and aesthetics to reveal the complex intersections between theatre and its socio-historical conditions. It paints a picture of the theatrical developments from 1917 through to the new millennium.

Manon Van de Water is a Professor of Theatre Research and the Director of the Theatre for Youth Program at the University of Wisconsin-Madison, USA

"Manon van de Water's fascinating study traces the evolving impact of totalitarianism on two Moscow theatres for youth from the October Revolution of 1917 through three generations of Soviets and into the decade beyond the fall of the USSR. With lively commentary on major writers like Evgenii Shvarts and Viktor Rozov, directors like Maria Knebel and Kama Ginkas, and a host of other pedagogues and artists, she evokes a history that cries out to be remembered by theatre scholars and artists." - Felicia Hardison Londré, Curators' Professor of Theatre, University of Missouri-Kansas City"In this well-researched historiographical and theoretical interrogation, Manon van de Water illuminates Soviet Russian theatres for young audiences as sites of complex political, esthetic, and pedagogic negotiations. But through this groundbreaking study, van de Water reveals more than just the ideological resonances of theatre for young people at one time and in one place. Through her meticulous scholarship she also explodes the perception of "children's theatre" as benign, or "without ideology," challenging scholars to examine seriously theatre for young people as manifested in multiple cultural and political contexts throughout the world." - Roger L. Bedard, Evelyn Smith Professor of Theatre, Arizona State University

'For anyone fascinated by 20th century Russian theatre, in all its contradictions and its struggles to reflect, or sometimes avoid, the social upheavals around it, this book on Russian theatre for children and young people will be required reading. From the 1917 Revolution onwards, Moscow and Leningrad pioneered the creation of theatres for youth that could play a pivotal role in the emergence of a new national identity, acquired real artistic and political status, and in so doing offered models followed by many other countries. But the very state support envied by so many elsewhere was at the same time its Achilles heel. Manon van de Water's meticulously researched study charts the historical developments and the ideological and artistic stresses and strains encountered by these theatres as they struggled for decades to fulfil the state's ideological goals, swerved from agit-prop to classic fairy tales as the climate required, experimented with style as and when they could, and later had to face the challenge of Perestroika and the rapid changes brought about by the collapse of communism and the arrival of 'market forces'. Her focus upon the work of two of the major Moscow theatres for youth, each responding to the changes in decidedly different ways provides a valuable insight not only into the workings of two significant theatres but into aspects of cultural life in Moscow more generally.' - Tony Jackson, Senior Lecturer in Drama and Director, Centre for Applied Theatre Research, Manchester University