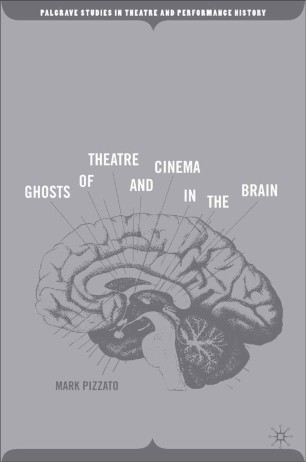 Ghosts of Theatre and Cinema in the Brain

Pizzato focuses on the staging of Self and Other as phantom characters inside the brain (in the 'mind's eye', as Hamlet says). He explores the brain's anatomical evolution from animal drives to human consciousness to divine aspirations, through distinctive cultural expressions in stage and screen technologies.​
MARK PIZZATO is Professor of Theatre and Film at the University of North Carolina-Charlotte, USA. He is the author of Edges of Loss: From Modern Drama to Postmodern Theory (University of Michigan, 1998), Theatres of Human Sacrifice: From Ancient Ritual to Screen Violence (SUNY, 2005), Ghosts of Theatre and Cinema in the Brain (Palgrave, 2006), Inner Theatres of Good and Evil: The Mind's Staging of Gods, Angels and Devils (McFarland, 2011), and Beast-People Onscreen and in Your Brain (Praeger, 2016). Pizzato also co-edited, with Lisa Perdigao, Death in American Texts and Performances (Routledge, 2016).