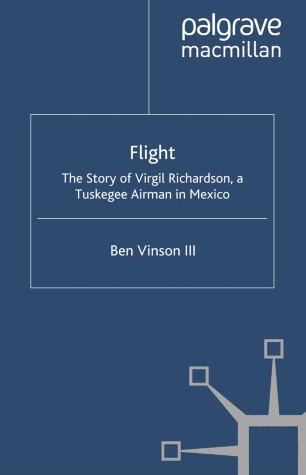 The Story of Virgil Richardson, A Tuskegee Airman in Mexico

Virgil Richardson blazed his own unique trail through the twentieth century: a co-founder of Harlem's American Negro Theater, 1930s radio personality, World War II pilot, and expatriate for most of his life. In Flight, this remarkable man tells his story in his own vivid words. Educated in Texas, Richardson set out for New York City in 1938 to build a career on the stage. Just when he was on the brink of success as an actor, World War II broke out and he was drafted into the army. After overcoming numerous obstacles, Richardson became a Tuskegee cadet in 1943, and later saw action flying over the battlefields of Europe. Upon returning to the racially divided U.S., he decided to move to Mexico, where he encountered a society quite different from the one he had left behind. Compellingly told and historically fascinating, this is the story of a determined individual unwilling to accept the limited options of Jim Crow America.

Ben Vinson III is an associate professor of Latin American history at Penn State University. He is the author of Bearing Arms for His Majesty: The Free-Colored Militia in Colonial Mexico, and he lives in State College, Pennsylvania.

"...A revealing look at an overlooked part of black history on the American continent."

"In this skillful blend of memoir, oral history, and biography, Ben Vinson brings to life the extraordinary journey of an unusual and accomplished man. Actor, founder of the American Negro Theater, fighter pilot, radio personality, teacher, playwright, screenwriter, and author, Virgil Richardson comes alive in his own distinctive voice - his family, experiences, loves, frustrations, and achievements. Upon his return from sixty-three combat missions as a member of the famed Tuskegee Airmen, Richardson found it impossible to negotiate the racial discrimination of post-World War II America. Having helped to liberate Europe, he now liberated himself by becoming an expatriate, living decades in Mexico, part of a small but influential black American community in the capital city below the border. This sensitive portrait of a man who contributed so much under such difficult circumstances illuminates the unusual connections between the African American communities in Mexico and the United States, and how one man of talent and determination navigated a life of freedom in twentieth-century North America." - Richard H. Kohn, Chair, Curriculum in Peace, War, and Defense and Professor of History, University of North Carolina at Chapel Hill, and Chief of Air Force History for the US Air Force, 1981-1991

"Of the many books reflecting on the twentieth century, Flight stands out as fascinating history of the relationships between African Americans and Mexico that tends to slip away unnoticed. It is a compelling and vibrant tale of the challenges faced by black men in twentieth century America, the complexities of race in the Americas, and a wonderfully engaging confluence of storytelling and empirical research. Flight will be equalling appealing for the history buff as well as lovers of a good story well told." - Kim D. Butler, Rutgers University

"Flight is well worth reading for anyone interested in the story of a true hero. Virgil Richardson's intriguing path through life should be must reading for anyone interested in The Tuskegee Airmen, a group of important figures in our history. This book also offers unique insight into the unknown stories of African Americans who settled in Mexico. Flight has detailed a underrepresented chapter in African American history and Mexican history." - Gregory Bell, author of In the Black: A History of African Americans on Wall Street