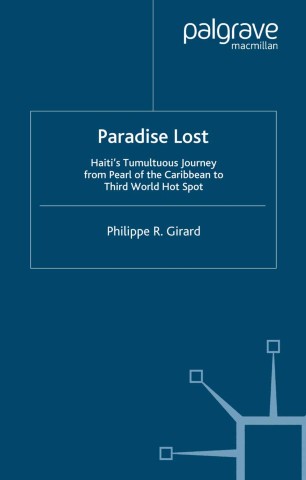 Why has Haiti been plagued by so many woes? Why has the United States felt a need to repeatedly intervene in Haiti's affairs? Why have multiple U.S. efforts to create a stable democracy in Haiti failed so spectacularly? Philippe Girard answers these and other questions in Paradise Lost . He examines how colonialism and slavery have left a legacy of racial tension, both within Haiti and internationally, as Haitians remain deeply suspicious of white foreigners' motives, many of whom doubt Haitians' ability to govern themselves. He also examines how Haiti's current political instability is merely a continuation of two hundred years of political strife that began during the War of Independence (1791-1804). Finally, Girard explores poverty's devastating impact on contemporary Haiti. This book is different from others in the field, arguing that Haitians - particularly home-grown dictators - bear a big share of the responsibility for their nation's troubles. In addressing the current situation in Haiti by looking to the nation's tumultuous past, Paradise Lost is timely and potentially controversial.

Praise for Clinton in Haiti by Philippe Girard: "An engaging and wonderfully readable account of the circumstances leading up to the U.S. invasion of Haiti in 1994, and its restoration of Jean-Bertrand Aristide as Haitian president." - Elizabeth Abbott, Trinity College, University of Toronto "This is an extraordinarily well written account that places Clinton's Haitian foreign policy in historical perspective. Linguistic wit and analytical sophistication prevail as Girard skillfully weaves readers through the complexities and tragedy of Haiti's history and the highly touted, but unsuccessful aftermath of the 1994 "invasion" by U.S. troops to restore Aristide and democracy to this Caribbean republic. Until Clinton administration classified documents become available this will remain the standard account and an object lesson for all future American cut-and-run attempts at peace-keeping and nation-building." - Joan Hoff, Montana State University, Bozeman "Written by an outstanding young French scholar of recent American history, this examination of U.S. intervention in Haiti under Bill Clinton probes the motivations behind an unnecessary military action and explains the ways in which objective failure is translated into political success. The author's finely-calibrated sense of irony makes his work as entertaining as it is instructive." - Alonzo L. Hamby, Ohio University, and author of For the Survival of Democracy: Franklin Roosevelt and the World Crisis of the 1930s