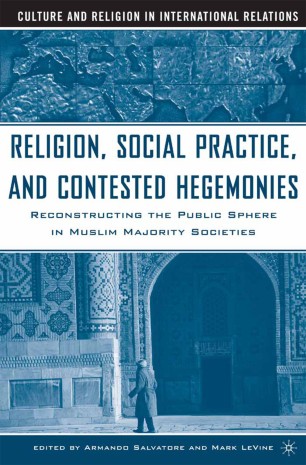 This collection of essays examines how modern public spheres reflect and mask - often both simultaneously - discourses of order, contests for hegemony, and techniques of power in the Muslim world. It builds on scholarship that re-imagines theories and practices of the public in modern and contemporary societies. While examining disparate time periods and locations, each contributor views modern and contemporary public spheres as crucial to the functioning, and understanding, of political and societal power in Muslim majority countries.

ARMANDO SALVATORE is Senior Research Fellow at the Institute of Social Sciences, Humboldt University, Germany. He is author of Islam and the Political Discourse of Modernity (Ithaca Press, 1997) and editor of Between Europe and Islam: Shaping Modernity in a Transcultural Space (co-edited with Almut Höfert, Peter Lang, 2000).

MARK LE VINE is Associate Professor of Modern Middle Eastern History, Culture and Islamic Studies at the University of California, USA. He is the author of Overthrowing Geography: Jaffa, Tel Aviv and the Struggle for Palestine (UC Press, NYP), Why They Don't Hate Us: From Culture Wars to Culture Jamming in the Global Era (Oneworld PressNYP), and co-editor with Viggo Mortensen and Pilar Perez of Twilight of Empire: Responses to Occupation (Perceval Press).

"Fresh and insightful, this provocative and original collection of essays explores ideas of the public, public reason, and civic virtue as they are being reshaped through increasingly open debate and practice in law, the media, religious expression, and women's movements in Muslim majority societies. In scope and approach, this volume is good to think with." - Dale F. Eickelman, coauthor, with James Piscatori, of Muslim Politics (new edition, 2004).

"This edited collection of essays is highly informative and often insightful in its assessment of the applicability of the concept of "the public sphere" to a variety of contexts in the Middle East. Most interesting and thought-provoking are the joint pieces by the editors Mark Levine and Armando Salvatore in which they draw on little-known writings by Gramsci and Foucault to re-examine the religious movements in the contemporary Muslim world. A very valuable contribution to understanding developments in that region."