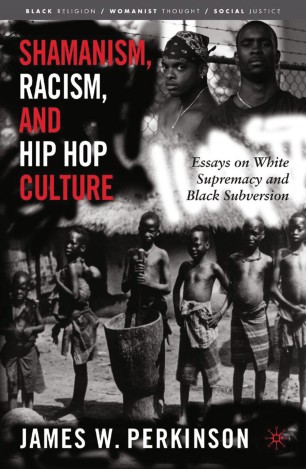 Shamanism, Racism and Hip Hop Culture is a groundbreaking collection of essays exploring the five hundred year history of white Christian hegemony that has so profoundly shaped American society. James W. Perkinson explores the idea that American identity and history are profoundly informed by an on-going interweaving of white entitlement and black disenfranchisement that constrains other forms of cultural struggle.

"Perkinson's latest book pierces the veil between detached theoretical assessment and lived experience. The work is visceral and evocative "labor at the level of the spleen." His rhythmic analysis of shamanic aspects of white supremacy and cultural resistance draw the reader from tattered and worn "race talk" toward resonance with a vibrating and justice oriented universe. In every chapter, his analysis of race has a poetic beat that infuses issues of race and cultural dissonance with power, clarity, and the potential for embodied restoration." - Barbara A. Holmes, Associate Professor of Ethics and African American Religious Studies, Memphis Theological Seminary

"Perkinson's book is a performance. This is a book by a poet-theologian. It is an example of how to do things not only with words but also with ideas and concepts; an example, in other words, of how to imaginatively perform theology and religious studies. What the book performs is a critical engagement with the world of race, racism and modernity. As such, it offers an example not of inverted snobbery (as we might expect given a certain reading of its authors 'race') but rather of what solidarity with the victims of racialized modernity might look like when practiced and attested by a white man struggling for racial justice. It is not necessary to agree with Perkinson's use of, among others, categories such as 'shamanism' and 'witchcraft' in order to see the power of his prophetic argument and the summons it proposes for us to walk humbly, love mercy and do justly. The book is intelligently written, powerfully argued and verges on being what one might call a counter-genre, a genre in which the poetic, the prophetic and the theological are co-mingled in a special way so as to form a comprehensive hermeneutical challenge to our usual modes of thinking and writing." - Edward P. Antonio, Associate Professor of Theology and Social Theory, Iliff School of Theology