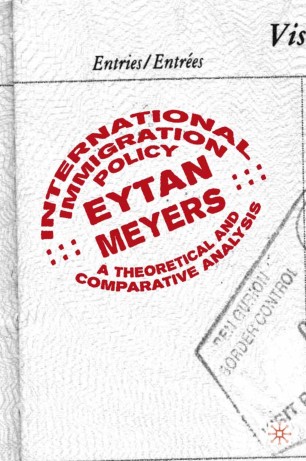 A Theoretical and Comparative Analysis

Numerous studies explore immigration policies of individual receiving countries. But these studies share several weaknesses. First and foremost, they are empirically orientated and lack a general theory. Second, most examine the policy of single country during a limited period, or, in a few cases, are contributed volumes analyzing each country separately. In general, immigration policy literature tends to be a-theoretic, to focus on specific periods and particular countries, and constitutes an array of discrete bits. This book is a response to this trend, offering a theoretical approach to immigration policy. It explains how governments decide on the number of immigrants they will accept; whether to differentiate between various ethnic groups; whether to accept refugees and on what basis; and whether to favour permanent immigration over migrant workers. The book also answers such questions as: How much influence do extreme-right parties have on the determination of immigration policy? Why do anti-immigration parties and initiatives enjoy greater success in local-state elections, and in the elections for the European Parliament, than in national elections? And under what circumstances does immigration policy become an electoral issue? Meyers draws on a wide array of sources on migration policy-making and using them derives proposed models in a way that few others have done before him. In addition, the book interrelates global and domestic factors that jointly influence government policy-making on international migration in a way that helps to clarify both spheres. Lastly, the work combines historical data with contemporary processes, in a way that draws lessons from the past while recognizing that changing circumstances usually revise governmental responses.

EYTAN MEYERS is Assistant Professor of International Relations at the Hebrew University of Jerusalem.

"Eytan Meyers fills a major hole in the scientific understanding of international migration by theorizing the interests and actions of the state. His systematic development and testing of theoretical models to explain which immigration policies are pursued under what circumstances and for what reasons represents a major advance in accounting not only for the political behavior of national governments, but the very nature of contemporary immigrant flows." - Douglas Massey, Princeton University

"This is a pioneering work, providing a clear and integrated theoretical framework for contemporary empirical data. Meyers interrelates global and domestic factors that exert joint influence on policy-making, providing an innovative overview of how immigration policies are made by liberal-democratic industrial states that have received significant migratory flows." - Christopher Mitchell, New York University

"Eytan Meyers provides a theoretically driven, comprehensive global framework for the comparative analysis of immigration policy. His solid case studies of the U.S., Britain, the Netherlands and Germany are historically informed yet bring the reader up-to-date on the latest developments. This book not only contributes a fresh perspective in comparative policy analysis but Meyers' convincing arguments on the centrality of the interdependence of socioeconomic and foreign policy factors ensure the book a prominent place in the international relations literature as well." - Rey Koslowski, Associate Professor of Political Science, Rutgers University