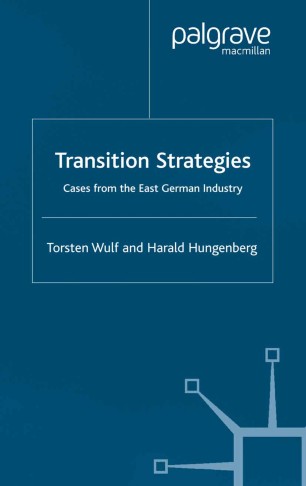 Cases from the East German Industry

The transition process of the countries of Central and Eastern Europe, which started more than a decade ago, has been the focus of much attention for both practitioners and scholars. Few studies however, address management issues involved in the transition process and no study has, until now, assessed the strategies and tactics which individual companies have pursued over the past decade as part of their adaptation process. This book fills this gap and will leave the reader with a better understanding of the adaptation process at single firm level.

HARALD HUNGENBERG studied Business Administration at the University of Giessen, and at MIT. He has also worked as a consultant and engagement manager for McKinsey & Company. Since 1999 he has held the Chair of Management at the Friedrich-Alexander-University in Nuremberg.

TORSTEN WULF studied Business Administration at the universities of Hagen & Mainz. Since 1999 he has lectured at the Chair of Management at the Friedrich-Alexander-University in Nuremberg.