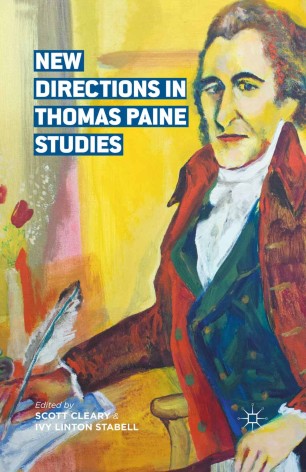 Named moral father of the Internet by Wired Magazine and quoted by President Barack Obama in his historic first inaugural address, Thomas Paine is an American revolutionary figure who continues to intrigue and infuriate. New Directions in Thomas Paine Studies offers an interdisciplinary perspective on Paine's distinctive influence on a number of eighteenth-century discourses, from politics and literature, to human rights and religion. This volume aims to expand the field of study on one of the most important figures not simply in the American, but the global revolutionary period of the late eighteenth-century. Drawing on an international group of scholars who hope to deconstruct the nationalistic boundaries that have hampered Paine studies for decades, the essays offer not only new interpretations of Paine's major works, but new methodologies that reflect the enduring presence of Paine in American cultural discourse.

Scott Cleary is Associate Professor of English at Iona College, USA. He has published on a wide variety of eighteenth-century authors, including Alexander Pope, Christopher Smart, Benjamin Franklin, and Thomas Paine. He is currently the Director of Iona College's Institute for Thomas Paine Studies.

Ivy Linton Stabell is Assistant Professor of English at Iona College, USA. She has published essays on biographies written for children in eighteenth- and nineteenth-century America.

“New Directions in Thomas Paine Studies is a collection of essays that invites conversations across lines of geography and methodology. … the book as a whole succeeds in bringing together scholarship that would never otherwise come together before the public eye. … New Directions in Thomas Paine Studies demonstrates that scholars continue to produce new and valuable information about this cosmopolitan revolutionary and his legacy in many countries.” (Kirsten Fischer, Cercles, cercles.com, October, 2017)
Buy options