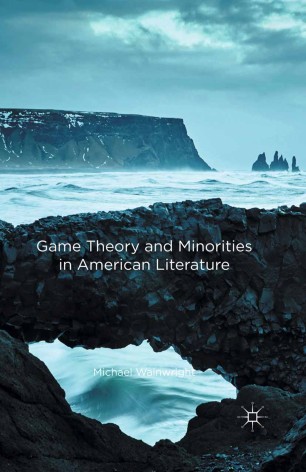 This interdisciplinary monograph applies the theory of games of strategy (or game theory) to an important subset of American literature: minoritarian texts. Fittingly, John von Neumann's game theory, as a mathematical subdiscipline practically abandoned by its founder after the publication of 'Zur Theorie der Gesellschaftsspiele' (1928), but purposefully reengaged with on his permanent relocation to America in 1938, carries the minoritarian credentials of a Hungarian-born national of Jewish descent. The state of international politics in the late 1930s certainly contributed to von Neumann's renewed interest in his theory, but a socioeconomic environment built on the legacy of slavery focused a reengagement with coordination problems that would last until his death. In these strategic situations, people must make choices in the knowledge that other people face the same options and that the outcome for each person will result from everybody's decisions. The four most frequently encountered coordination problems are the Stag Hunt, the Prisoner's Dilemma, Chicken, and Deadlock Minoritarians find majoritarian attempts to control these social dilemmas particularly challenging. Hence, a game-theoretically inflected hermeneutic that identifies the logical, rational, and strategic state of human interrelations not only helps to categorize, but also to analyze minoritarian texts. The authors under detailed consideration are Benjamin Franklin, Frederick Douglass, Harriet A. Jacobs, Zora Neale Hurston, William Faulkner, Toni Morrison, and Mohsin Hamid.

Michael Wainwright is Associate Lecturer of English at Royal Holloway, University of London, UK. He is the author of Darwin and Faulkner's Novels: Evolution and Southern Fiction.

"This is a key book in a newly emerging area, using game theory and related issues of strategic decision-making, polity and political economy, to provide a fresh understanding of key works. With his close attention to detail and rigorous approach, Wainwright offers refreshing and persuasive readings of familiar texts, and opens up innovative contexts for reflecting on the literature of the US." - Stephen Matterson, Professor of US Literature, Trinity College, University of Dublin, Ireland

"Games Theory and Minority American Literature will interest literary and game theorists alike. In this companion to his respected Games Theory and Post-War American Literature, Wainwright again demonstrates the potential of games theory to elucidate literary texts in significant ways. Applying ideas of Von Neumann and Morgenstern within a theoretical context informed by Rousseau, Lacan, Maslow, Parfit and others, he convincingly argues for the need to recognize the 'protological prefigurations of social constructions' that inform the struggles of minority American writers such as Frederick Douglas, Harriet Jacobs, and Zora Neale Hurston and majority writers such as Franklin and Faulkner as they write from a minority perspective and, as a result, challenge dominant American notions of self-reliance." - David Rogers,
Director, The Kingston Writing School, Kingston University, UK


"Game Theory and Minorities in American Literature challenges the conventional wisdom that literary criticism and mathematics are utterly different ways of understanding the world. Indeed, Michael Wainwright's bracing and perceptive study makes fine conversation partners of the two disciplines and opens up new possibilities for reading American literature. The book, also richly informed by aspects of psychoanalysis and political history, reads a number of key figures, including Frederick Douglass, William Faulkner and Toni Morrison with acute care to illuminate patterns of competition, rivalry and collaboration. Wainwright is alert to the politics of injustice and identifies textual strategies used to achieve liberty and equality. It is a dynamic and distinctive contribution to an evolving and exciting field." - Andrew Tate, Reader in Literature, Religion and Aesthetics, Lancaster University, UK
Buy options