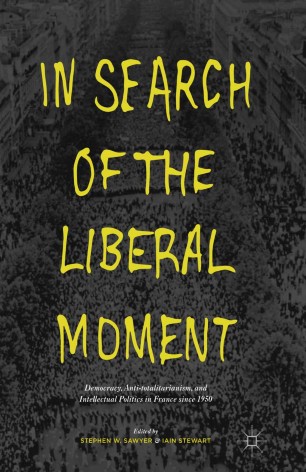 In Search of the Liberal Moment

Democracy, Anti-totalitarianism, and Intellectual Politics in France since 1950

This book explores a series of challenging new perspectives on the origins, development, and legacy of France's 'liberal moment' during the second half of the twentieth century. It surveys a significant shift in interest regarding socio-political philosophy and culture, with the 1970s emergence of a blossoming French curiosity about liberalism and liberal thought. While liberalism had played an important role in French political debate prior to this period, liberal voices were often disregarded. It was not until this newfound fascination with liberalism by French intellectuals—spanning from the second left to the new right—that a French liberal revival truly occurred. In Search of the Liberal Moment addresses this revival, its resultant resuscitation of nineteenth-century authors like Tocqueville and Constant, its relationship with the contemporary rise of neoliberalism in Britain and the US, and how its adherents used liberalism to rethink the past, present, and future of modern democracy.