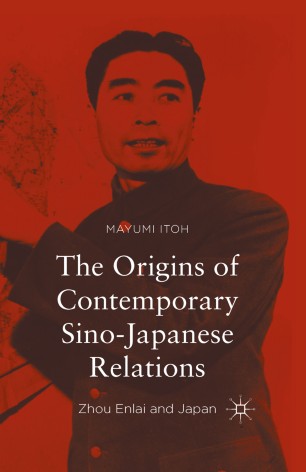 The Origins of Contemporary Sino-Japanese Relations

In this book, Mayumi Itoh presents a comprehensive and in-depth examination of China's first Premier Zhou Enlai's youth in Japan, where he received his enlightenment in Marxism from the Japanese scholar Kawakami Hajime. Itoh analyzes primary sources including diaries and letters to reveal the innermost thoughts of young Zhou about how to save China from total destruction by imperial powers, and demonstrate how Zhou's time in Japan gave him a profound understanding of the Japanese people and society. These formative experiences would become the foundation for post-World War II Chinese foreign policy toward Japan and the origins of contemporary Sino-Japanese relations.

Mayumi Itoh is a former Professor of Political Science at the University of Nevada, Las Vegas, USA. She has also taught at Princeton University, USA, and Queens College, CUNY, USA. She is the author of numerous books, including Globalization of Japan: Japanese Sakoku Mentality and U.S. Efforts to Open Japan and The Hatoyama Dynasty: Japanese Political Leadership Through the Generations.

"Mayumi Itoh's The Origins of Contemporary Sino-Japanese Relations is a meticulous, scholarly study of Zhou Enlai's early years in China and his political awakening in Japan in the 1910s. Zhou, Mao's premier and foreign minister, was one of the most important political leaders of the 20th century, but little is known about how this young man seeking a post as a Chinese governmental official developed to became a Marxist revolutionary. Itoh has masterfully blended together primary sources in Chinese, Japanese, and English, as few scholars can, in telling the story of the lives and experiences of young Chinese students in Japan. She skillfully explores the impact Taisho Japan had on these students and the course of Chinese history. The detail she has melded together in this book is as impressive as her previous research on zoo policy in wartime Japan and Japanese political leadership. I highly recommend this book especially for political scientists as well as historians of both Japan and China." - Ronald Hrebenar, University of Utah, USA
Buy options