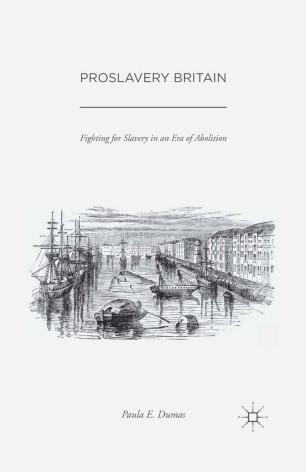 Fighting for Slavery in an Era of Abolition

The history of British abolition and the fight to end Britain's participation in two long- standing practices, slaveholding and slave trading, have inspired generations of academic study. Countless historians, beginning with the abolitionist Thomas Clarkson as far back as 1808, have written triumphant tales of the selfless abolitionists as though they were writing the complete story of abolition. These early portrayals of abolition as a triumph of humanitarian progress have resulted in a one-sided story that continues to be repeated in countless studies of the economic, political, and humanitarian motivations behind abolition.

This book, however, explores the untold story of the fight against abolitionist forces in Britain between 1783, when the first anti-slavery petition was presented in Parliament, and 1833, when the British Parliament formally voted to abolish slavery in their West Indian colonies. It is the story of the men and women who willingly participated in the slave trade, promoted slavery through print media and the arts, fought for it in Parliament, and channelled their money into supporting these efforts. The members of this proslavery society shaped the process and outcome of abolition. They delayed and defeated numerous bills that were meant to abolish British participation in the slave trade. They used thoughtful, rational contemporary arguments that supported Britain's participation in the 'horrid trade' and plantation slavery. They won a victory within the slavery abolition bill, gaining an unprecedented financial compensation package and several more years of guaranteed labor. Yet the participants in this thriving, persuasive proslavery culture have been hidden away in the histories of British abolition, their power and influence downplayed, and their reputations ruined as they are continually cast aside in favor of the triumphant narrative of British abolition. This is the first book to focus on the strategies, the successes, and the failures of the many people who fought to maintain and promote Britain's participation in the international slave trade and plantation slavery.

Paula E. Dumas received her Ph.D. in history from the University of Edinburgh, UK. The University selected her work on proslavery arguments for the Jeremiah Dalziel Prize in British History.

“The book consists of three parts. The introduction and opening chapter present proslavery positions from economic, strategic, historicist, legalistic, paternalistic, moral, and religious points of view. … there is much here to interest scholars of slavery, abolition, and emancipation, as well as anyone interested in the history of political lobbying, and the book offers a very useful starting point for future studies of British proslavery.” (Brycchan Carey, American Historical Review, Vol. 122 (2), April 2017)