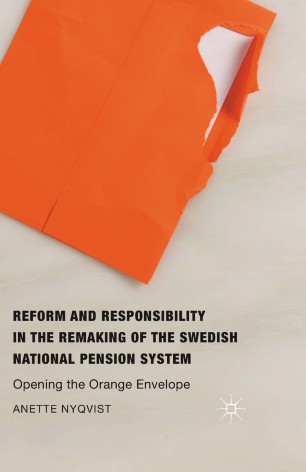 "The concept of the welfare state is almost interchangeable with the concept of Sweden, and in this meticulous, highly readable study Nyqvist examines its nuts and bolts through a close look at the Swedish pension system. Moving between the particularities of the orange envelope and its wider implications, this monograph is not just a study of Sweden, but an innovative contribution to the anthropology of governmentality and the state in a neoliberal era." - Thomas Hylland Eriksen, Professor of Social Anthropology, University of Oslo, Norway

"Reform and Responsibility in the Remaking of the Swedish National Pension System is a tour de force. Nyqvist analyzes brilliantly the challenges of creating a new Swedish pension system, not merely as abstract issues of rules and regulations, but as an endeavor that evokes a complex range of human concerns and societal preoccupations. The book sets a high standard for anthropology of policy insisting that the public must be viewed as fully within the policy drama." - Douglas Holmes, Professor of Anthropology, Binghamton University, USA; author of Economy of Words: Communicative Imperatives in Central Banks (2014).

"In 1999 Sweden introduced a new mandatory national pension system that is transforming its society. In this pioneering ethnographic study, Nyqvist shows how an anthropological study of pension reform provides a critical window onto wider issues, from neoliberal policy agendas and changing state-citizen relationships, to new forms of governance based on financialization and the creation of responsibilized subjects. This book is essential reading for anyone interested in political anthropology and social change in contemporary Europe." - Cris Shore, Professor of Social Anthropology, The University of Auckland, New Zealand; author of Building Europe: The Cultural Politics of European Integration (2000) and co-author of Policy Worlds: Anthropology and the Analysis of Contemporary Power (2011)