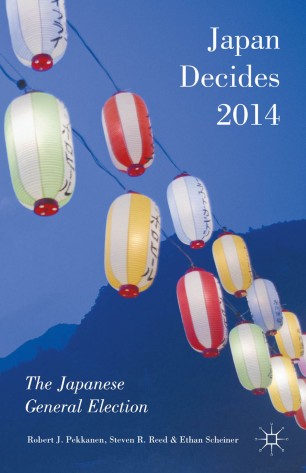 Collecting original and high-quality analysis by top scholars from Japan, the United States, Australia, and Europe, this volume analyzes the results of the 2014 election, examining each of the major political parties, central policy issues, campaign practices, and considers how the results were used as a mandate for massive policy reform.

'The authors of this comprehensive analysis of the 2014 general election in Japan have produced one of the most important studies of Japanese electoral politics to appear in many years. It is essential reading for anyone - student, scholar and policy maker - interested not only in the 2014 election, but in Japan's political democracy and its future.' Gerald Curtis, Burgess Professor of Political Science, Columbia University, USA

'Japan Decides 2014 reveals how Prime Minister Abe caught the opposition flat-footed by calling an early election and succeeded in using his third-straight win at the polls to claim a mandate for policy changes that weren't even emphasized in the campaign. Anyone trying to understand where Japan is headed under Abe needs to read this book.' Leonard J. Schoppa, Associate Dean for the Social Sciences and Professor of Politics, University of Virginia, USA

'The 2014 election as Abe's 'masterful strategic stroke' ever heard such words about Japanese politics? This book's 21 concise, well written chapters dissect the causes and effects of the remarkable election from all angles. They add up to the best overview I know of Japanese politics today.' John Creighton Campbell, Project Researcher, Institute of Gerontology, Tokyo University, Japan, and Professor Emeritus of Political Science, University of Michigan, USA