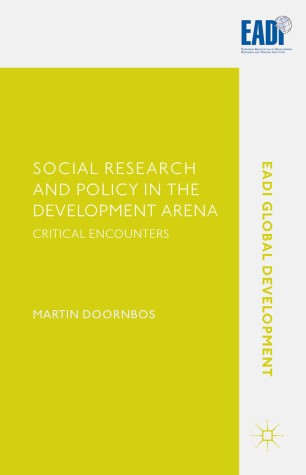 The author focuses on the research-policy nexus in development studies, highlighting reciprocal orientations and interactions between the domains of social research and of policy and politics. He looks at instances where these domains are complementary and geared towards common objectives, but also with others marked by opposing rationales.

'After a distinguished career as a scholar of comparative politics and development policy, Martin Doornbos in this volume tackles some of the thorniest challenges faced by political analysts. What can we and what should we contribute to ongoing policy processes? How can we engage critically with dominant policy paradigms without succumbing to the temptation of either collusion or collision? Drawing on his rich experience and using empirical cases from Africa, Asia and the Pacific, Doornbos highlights the complex and often unexpected ways in which knowledge and power interact in the realm of development policy. His book is a call for relentless reflexivity on behalf of researchers who study politics. But Doornbos also encourages us to engage with policy processes that often defy textbook definitions and thereby provide an opportunity for conceptual innovation. Social research and policy in the development arena is recommended reading for all political scientists and anthropologists who study contested policy processes in the global South.' - Tobias Hagmann, Roskilde University, Denmark

'Professor Doornbos' book is an urgent read for both scholars of the development process and its in-the-field practitioners. Doornbos has worked extensively at the intersection of academic research and applied project implementation. Few scholars, if any, are as qualified to reflect on what happens when academic theory collides with the reality of a developing environment whose many realities may include inflexibility of policy, political rivalry, bureaucratic inertia and ethnic tensions. His book is an invaluable treatise on which academic ideas have a survival value and as a guidebook for the practitioner preparing to meet the real world of development practice.' - Michael F. Lofchie, UCLA, USA

'Professor Doornbos shares with us insights acquired from years of critical social and political research in Africa, Asia and the Pacific. Failed states, complex emergencies, post-conflict recovery and the provision of food security indicate the complex developmental and humanitarian themes that are dealt with scrutinized in environments in which a multitude of local, national and international/multilateral actors are involved, representing different, often competing and conflicting perceptions and interests. Add to this research into statehood building and legitimacy in the most challenging social, economic and political environments. This tour de force provides the reader with unique insights into the many challenges involved in development and in dilemmas related to the development-research nexus. Scholars and practitioners will want this book easily available in their bookshelves.' Olav Stokke, Fridtjof Nansen Institute, Norway