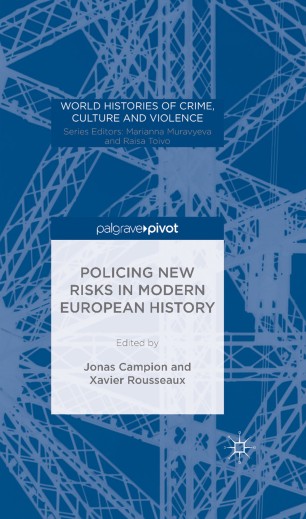 Authorities often fear societal change as it implies finding a new balance to live together within society. Whether it is defined by economic, political, social or cultural factors, the transformation of life in society is considered by authorities as a 'risk' that needs to be framed and controlled. The state's response to this situation of transformation can be analysed through the prism of the police. Informally or not, police systems adapt their regulatory frameworks, their structures and their practices in order to respond risks, new threats and new rules. This process, which is mostly of a contemporary nature, is also deeply historic. Analysing it on the long run is therefore particularly relevant. From the late nineteenth-century until the second half of the twentieth-century, Policing New Risks in Modern European History provides a panorama of political and police reactions to the 'risks' of societal change in a Western European perspective, focusing on Belgium, France, and The Netherlands, but also colonial perspectives.

Jonas Campion is Postdoctoral Researcher funded by the Nord-Pas-de-Calais Region at the Institut de recherches historiques du Septentrion, Université Lille 3 Charles-de-Gaulle, France, and Invited Lecturer in History at the Université Catholique de Louvain, Belgium. From 2011 to 2014, he was FRS-FNRS Postdoctoral Researcher attached to the Centre of Law and Justice History, Belgium. He is currently working on security policies and police history in Europe.

Xavier Rousseaux is Research Director at the National Funds for Scientific Research, FRS-FNRS, Belgium, and Professor at the Université Catholique de Louvain, Centre for Law and Justice History, Belgium. Working on the history of crime and justice, he is coordinating the IAP Network 7/22 (Belgian Science Policy), 'Justice & Populations: The Belgian Experience in International Perspective, 1795-1950'. He recently published 'A History of Crime and Criminal Justice in Europe' , in S. Body-Gendrot et al's, Handbook of European Criminology (2013).