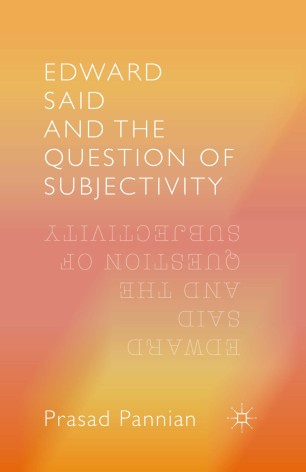 Edward Said and the Question of Subjectivity

Edward Said and the Question of Subjectivity explores the notion of subjectivity implicated in and articulated by Said in his writings. Analyzing several of his major works, Pannian argues that there is a shift in Said's intellectual trajectory that takes place after the composition of Orientalism. In so doing, Said forthrightly attempts to retrieve a theoretical and political humanism, as Pannian identifies, despite the difficult and sanguinary aspects of its past. He elaborates upon Said's understanding that only after recognising the structures of violence and coming to discern strategies of interpellation, may the individual subject effectively resist them. Pannian also explores Said's ideas on exilic subjectivity, the role of intellectuals, acts of memory, critical secularism, affiliation and solidarity before dwelling on his interface with Marxist thinkers such as Antonio Gramsci, Theodor Adorno, and Raymond Williams. This engagement marks Said's own subject formation, and shapes his self-reflexive mode of knowledge production.