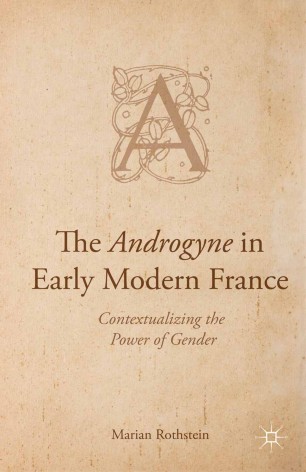 The Androgyne in Early Modern France

Contextualizing the Power of Gender

Based on sources in Genesis and Plato's Symposium , the androygyne during Early Modern France was a means of expressing the full potential of humans made in the image of God. This book documents and comments on the range of references to the androgyne in the writings of poets, philosophers, courtiers, and women in positions of political power.

Marian Rothstein is Professor Emerita of French at Carthage College, USA. She is the author of Reading in the Renaissance: Amadis de Gaule and the Lessons of Memory and editor of Charting Change in Renaissance French Thought and Culture.

“Scholars of early-modern French literature interested in gender have long been waiting for this volume and it does not disappoint. Marked by Rothstein’s characteristic wry wit, expansive engagement with sources canonical and barely known, and distinctive account of early modern gender, the volume details the variety of ways in which the androgyne facilitated access to what she calls human plenitude.” (Marc Schachter, H-France Review, Vol. 17 (226), December, 2017)

“In this volume, Marian Rothstein builds on her earlier article-length investigations of the androgyne myth’s use in literary and political environments in early modern France. … Well written and documented, this work will become a standard for anyone interested in questions of gender in early modern France.” (Jeff Kendrick, French Studies, Vol. 70 (4), October, 2016)