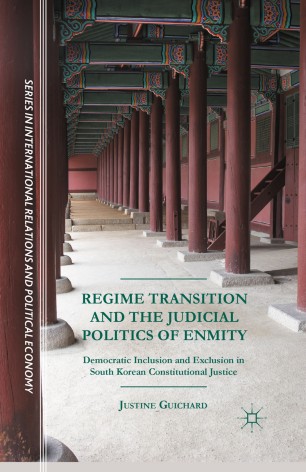 Regime Transition and the Judicial Politics of Enmity

Among the societies that experienced a political transition away from authoritarianism in the 1980s, South Korea is known as a paragon of 'successful democratization.' This achievement is considered to be intimately tied to a new institution introduced with the 1987 change of regime, intended to safeguard fundamental norms and rights: the Constitutional Court of Korea. While constitutional justice is largely celebrated for having achieved both purposes, this book proposes an innovative and critical account of the court's role. Relying on an interpretive analysis of jurisprudence, it uncovers the ambivalence with which the court has intervened in the major dispute opposing the state and parts of civil society after the transition: (re)defining enmity. In response to this challenge, constitutional justice has produced both liberal and illiberal outcomes, promoting the rule of law and basic rights while reinforcing the mechanisms of exclusion bounding South Korean democracy in the name of national security.