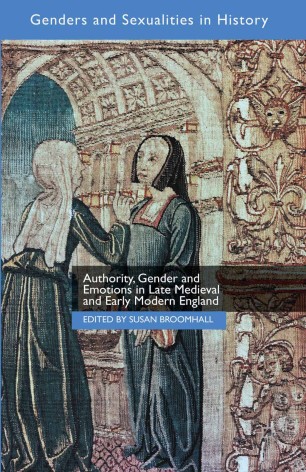 This collection explores how situations of authority, governance, and influence were practised through both gender ideologies and affective performances in medieval and early modern England. Authority is inherently relational it must be asserted over someone who allows or is forced to accept this dominance. The capacity to exercise authority is therefore a social and cultural act, one that is shaped by social identities such as gender and by social practices that include emotions. The contributions in this volume, exploring case studies of women and men's letter-writing, political and ecclesiastical governance, household rule, exercise of law and order, and creative agency, investigate how gender and emotions shaped the ways different individuals could assert or maintain authority, or indeed disrupt or provide alternatives to conventional practices of authority.

“Authority, Gender and Emotions in Late Medieval and Early Modern England is a rich and wide-ranging collection of essays that addresses the ways men and women negotiated and often manipulated emotion to engage in social, legal, and political life. … this collection will be of interest to anyone concerned with emotional expression and the performativity of gender in relation to the various types of authority that stretch across medieval and early modern divides.” (Katey E. Roden, Renaissance Quarterly, Vol. 69 (4), 2016)

"This ground-breaking collection brings together a series of fine essays which explore the interchange between emotions, authority and influence, especially in a gendered context, in late medieval and early modern England. It will be compulsory reading for students and scholars who want to start exploring this fascinating new field." - Christopher Fletcher, CNRS-University of Paris I (Panthéon-Sorbonne), France
Buy options